Zombie Dice 2 is a three dice expansion for the base game.   It’s called “double feature” as in a Matinee Movie and Stars three new dice.

the Hunk (let’s assume his name is Brad) : Lots of shotguns, including a deadly double shotgun, but also a double brain, so this dice is a real gamble when it turns up.  In addition if he shoots you and you happen to have the Hottie or Santa Claus in your brain pile he rescues them and you lose their brains.  Boo hiss!  he’s behind you etc.

The Hottie : a Pink Dice  (of course) has a lot more run aways.  The pink dice is a real pain the snag and as slippery as a greased up deaf guy

And the piece of resistance

Santa Claus : This is the most interesting of the dice, as well as featuring the normal brain and blasts, you can make out like a bandit with this dice as he features presents of and energy drink which allows you to catch up and change run aways to brains (red bull does indeed give you wings) and a Helmet that allows you to take four shotgun blasts rather than the normal three that lesser less helmeted zombies succumb to 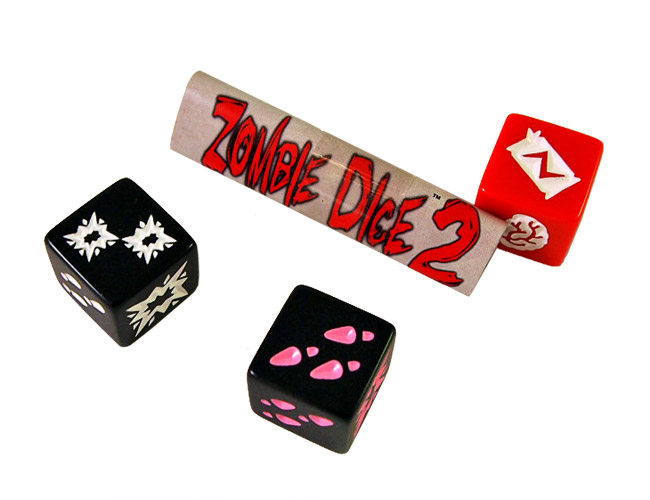 As expansions go, it’s a bit expensive for what you get. It’s a tenner or so for three dice and two of them are pretty boring.  That said, if you’re willing to fork out it does fit in well with the base game and just like an object of beauty it’ll be a joy forever.

I’ve had the expansion for a long time and it does improve the game.  Shop around and see what you can get it for