The call went out for gamers to cast off the yoke of eating, new year spirit and goodwill to all men and get back in the sodden trenches of backstabbery and pettiness that is thur night gaming.  We were not left wanting.

A number of the lads had gotten presents of boardgames for xmas and we all eagerly stuck our snouts in their gaming troughs and snuffled deep of new cardboard and rules.  Truth be told (and this is one of the things that makes Knavecon such a good thing) there is nothing to beat someone bringing a new game to the table, knowing the rules and being able to explain them properly.  Once again we had that last night with, Terra Mystica 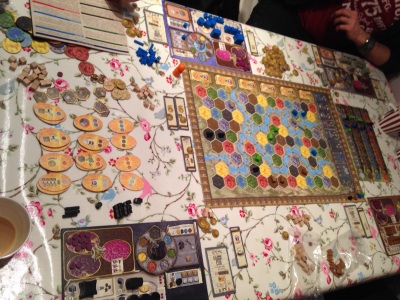 But before that all started we had a lash of a game I was lucky enough to get for xmas, COUP

Each person takes two random cards which represent the influence they have on the court (the government).  The deck consists of five sets of three duplicate cards  the Captain, Ambassador, Assassin, Contessa and Duke.  These are kept face down so no-one knows what everyone else has.  Each of the cards have a particular action associated with it (the captain can steal, the duke tax and so on) and anyone can do any of these actions but in doing so they CLAIM they have those cards in their hand.  So it’s all about bluffing.  Where it gets interesting is where someone calls an action and someone else shouts “PULL THE OTHER ONE!” or words to that effect and one or other is incorrect.  the loser has to turn one of their cards face up and if both of their cards are face up, that it’s they’re out of the round. Be the last person standing and you win.

It plays very quickly.  you can have it done in five minutes, but we found that after a while the game became much more cagey with people not willing to risk their positions to stop others.

I liked it, I’m definitely going to play a bit more of this and I think it would play well over several rounds just like poker where you try and figure out the person rather than the cards.

SO onto the meat and potatoes (or turkey and sprouts if you will).

Terra Mystica is a game I have heard about over and over for the last year.  It’s never been described as anything but awesome so I was delighted to get a crack at it. 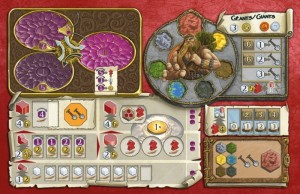 Three things that struck me about it

Luckily enough the game owner knew the rules and after a good half hour of explaining we were shakily off.  It’s worker placement big style.  There’s a LOT going on, a constant balancing act and although I thought it might get bogged down with analysis, play is swift.  Each player gets one of 14 races and attempts to terraform the lands around them and build the biggest city, get the highest score and if possible cock block other players.  There are numerous routes to victory and everyone’s race plays differently so it has a fantastic replay value.  As a game it plays a BIT like stone age, puerto rico and a number of others but it is pretty unique in itself.

Having played one game I’m eager to play another and interestingly I think once setup you could play it within an hour.  It’s certainly not the game I expected but that’s no bad thing.  What I really liked about it is even though it’s relatively complex (it wouldn’t be the best game to teach a new gamer) none of the mechanics are superfluous or bolted on.  I also liked that everyone got it very quickly indeed after the first turn.

As for turns it only has six and it whips around very quickly.  There’s very little downtime as you’re constantly thinking about where to go next to leverage a bit of advantage.  This game demands another replay and then another

After that we played  Cthulhu Gloom 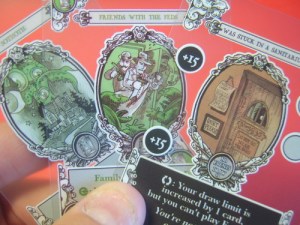 Cthulhu Gloom is a themed version of Gloom (I sound like I played gloom but I haven’t).  It features a very nice mechanic of transparent cards which fit over each other and add bonus/negatives to each of the cards.  The weird story is, you have to depress your four family members and then bump them off (no I have no idea why) and then everyone scores the depressed score for all your dead family members…..  yes it’s a bit weird, but it’s not bad.  Certainly a filler and at the late hour it was played it was tough to get an overall picture of it.  The cards really are excellent, the whole transparent thing is superb

We also managed to get in a game of Cards Against Humanity and then it was high time to pull the plug and get some sleep.

Good start to the year