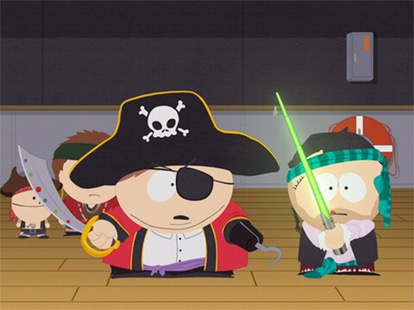 I really like the cut of Pirate’s Cove’s jib. It’s straightforward, polished and well produced. It’s also a lot of fun to play.
The game sees you and up to four run soaked chums setting sail as pirates in your very own jellopy pirate ship. Your ship is made up of four stats.

Sails : initiative in a fight.

Cannons : how many dice you roll in a fight.

Crew : how many cannons you can operate

Hull : how much treasure you can carry. (Also a city in the UK were the very worst of humanity comes from)

Four of the islands each allow you to buy increases in one of these stats. They are cleverly named Sail, Cannon, Crew and Hull island. The fifth gives you a spot to bury money and treasure (guess the name) and the last one is tavern island where you can visit the brothel and pickup something nasty or more accurately buy pirate cards that give you one shot bonuses in combat, some bonus game points or something nasty to unleash on your opponents when they’re down and you feel it your piratey duty to administer a swift kick.
Each turn treasure cards are turned over on each island which show varying amounts of gold, fame, treasure and pirate cards. Players secretly pick which of the islands they wish to sail to and they’re all revealed and pirates move there in one go. If more than one pirate lands at the same island it’s Fightin Time! 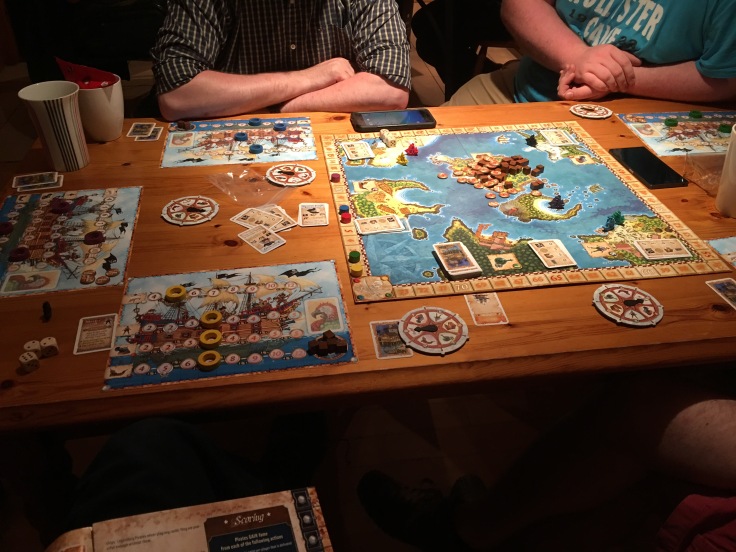 Battles are pretty simple affairs and let players hammer each others ship into submission. When it’s your shot you pick a section to target (sails, crew, cannon, hull) and blaze away hopefully reducing on of these. Bad things happen when you get hit getting hit in these sections reduce your initiative, firepower or loses you valuable treasure. Reduce any of these stats to zero and blub blub they lose the battle and wind up at the seventh island I didn’t mention before, Pirate Island a sort of pirate quick fit that patches your ship back up just enough to get you back on the sea. Coming back from Pirate island straight into another battle is painful. If you’re unlucky or the other players are vindictive (of course) you could see it several times in a game.
Those left standing at the islands grab the aforementioned booty and (at least with my group) lord it over the other players who didn’t fare to well this turn.

Treasure island in the middle of the map is like a highlander holy ground. Multiple ships can be there but you can’t have a fight. The central island lets you bury treasure and gold for fame points.
In addition to running into other players you can also bump into (if you’re stupid) the Legendary pirate who moves around from island to island one at a time and at the start of the game way outclasses you. Later in the game it’s possible to have a ship good enough to beat them but it’s a close run thing that’s sometimes worth the victory points. Kill that legendary pirate and another one appears (probably worse) at the start
This is a lovely little game. It’s fairly fast maybe 90 mins or less. The production values and artwork are spot on. Game play is smooth with little downtime. Battles are quick and always fun. Games are close run and the rules are straightforward and unambiguous. I’ve had a copy of this game for the longest time and it appears every so often. It’s one of those games that is worth having in collection because you’ll play it again and again and it works well for kids as well as adults
Yargh! As we pirates never said ever
Vic

One thought on “More a set of guidelines”