I like Scotland Yard. I like letters from White chapel and I like Fury of Dracula. I also now like spectre ops.
Spectre ops sees one character (the op) trying to infiltrate a high tech complex and counting coup in five different zones then egressing like a panda. The op is invisible to the four defending players (whom I can only assume have restricted zoolander style vision) and must use their special abilities to hunt down and eliminate the intruder.

The op (there’s a choice of four different flavorsof agent. All with different mad skillz) moves secretly on gridded paper on a map of 200+ locations. The controlling player has to indicate if the op moves into the vision of the defenders who can only see in straight lines in the same way as bomber man’s bombs explode.
The defenders are a rum bunch all with interesting abilities. The wolfman dude can move half distance and “sniff” showing up the infiltrator if they’re within five spaces, the gun character is handy with a sniper rifle. The power dude can operate the team vehicle remotely. The team have for access to a zippy car that can zoom them across the map and also has a useful scanner which shows if the operative is north, south, east or west of the car. 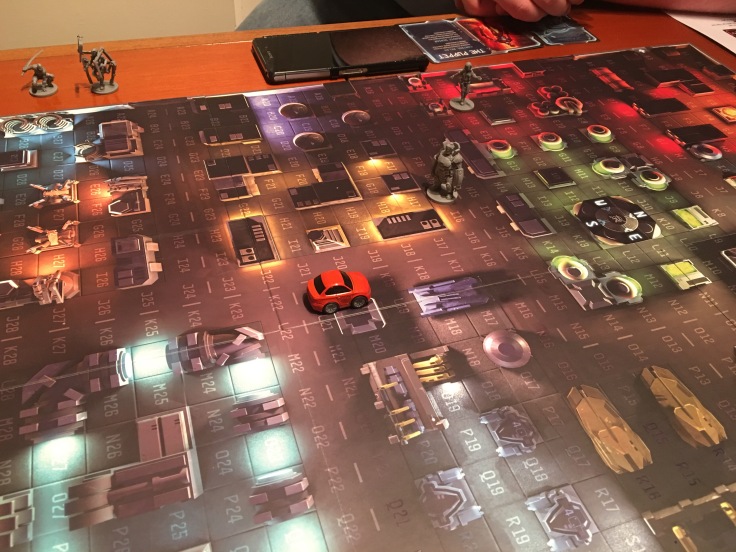 When the defenders do corner the operative they can take pot shots at them and try and knock their four life points down to zero. The operative can call on a number of one off cards like smoke grenades and so on to assist them in their rapid stage left exit

It scales nicely with more players. With a full five one of the hunters is secretly a traitor. As you can imagine this is music to my ears and sadly when I played I was neither op nor traitor but I’m going to play again. Oh yes.
Spectre ops is quick. More so if the op is crap (ha ha). It’s straight forward to learn. It’s actually a lot of fun being a hunter as well as the hunted. It’s pretty cheap. It’s got nice paintable models. Nice artwork and a good theme. I like it. More of this sort of thing. Let’s have a game at Knavecon
Huzzah!
Vic