David Stafford or “MrSaturday” as he’s better known as (by at Least half a dozen people) is an avid gamer and highly skilled artist.  Dave is the brains behind the Knavecon artwork and variety of other projects I’ve roped him into over the years. (I’m sorry Dave for everything, you were told don’t trust Vic.) I HIGHLY recommend a visit to his blog before you read further, it’s ok, I’ll wait….

See I told you he was good didn’t I?

So as a continuation of why we game and why it makes us Happy I caught up with Dave and asked him a few questions, but this time it’s from the angle of someone who paints and someone who for want of a better term.  Likes the pictures.. 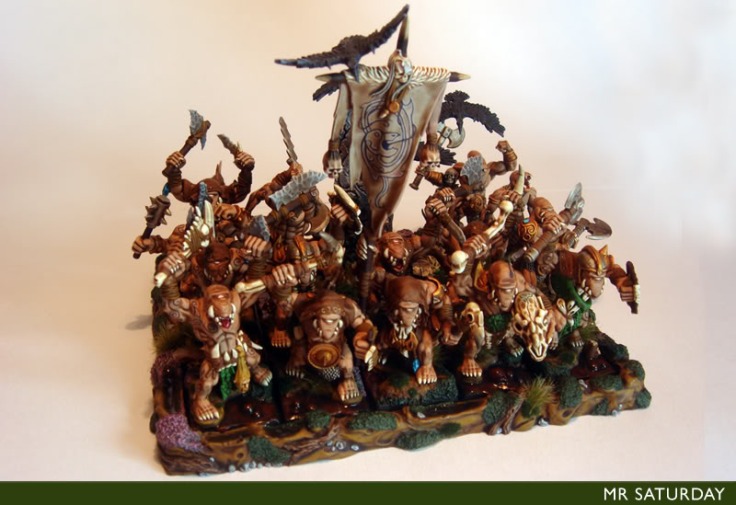 My memory is ropey at the best of times. Must have been all those lead miniatures I cast as a kid. Aaaahh… lead fumes. Who are you again?

So, earliest memory of gaming. I reckon it would be in 1st year in Secondary school. I would have been twelve. I recall playing 3rd edition Warhammer, Heroquest and 1st edition Spacehulk soon after discovering Prince August and Citadel miniatures. I was lucky enough that several other students enjoyed gaming, which was regarded as pretty odd at the time. ‘Satan is a roleplayer!’ and all that. The school I went to was like a miniature Hogwarts, complete with towers, abandoned dormitories and eccentric wizards, or priests, as they were known at the time. We used to hole up in a room in the abandoned dorms and game. I still recall that Warhammer 40k/Paranoia mashup fondly.

The miniatures were the first thing that drew me to gaming, and that remains true to this day. I remember catching sight of White Dwarf, issue 95 in the bookshop, back in 1986, I think it was. (I still have it) It literally stopped me in my tracks. It was the 3rd edition launch issue, so it had lots of pictures of fantasy armies beating the bejesus out of each other. It imprinted pretty irreversibly on my twelve year old mind. Soon after I got a box of the plastic skeleton warriors, and that was that. I’ve been going ever since.

It quite literally stops me from going insane. I get pretty grumpy if I haven’t been painting for a few days. Nobody wants that.

I get an unfeasible amount of satisfaction from painting. I tend to paint for gaming, even if I rarely play that game. It gives a structure to my choice of models. Choosing the miniature, the colour scheme, the techniques, the basing style, it ticks all my relaxation boxes. Adding the finished miniature to the cabinet gives me that staring into a magnificent sunset on a quiet beach kind of ‘Aaahhhh…’ feeling.

Gaming is a very social hobby, but painting is the opposite, it’s a more contemplative, introverted endeavour. The two meld well I find, as showing off the fruits of your labours to your peers is the cherry on the cake of painting, and it gives you a lot of mojo for your next project when you see other people’s work.  There’s nothing that stirs a painter’s blood than seeing well painted gangs/armies on great terrain.

The various painting groups online are also gold for miniature painters. No matter what game you are into, there’s a group of folks out there who paint and game for it, and are more than happy to see your work. 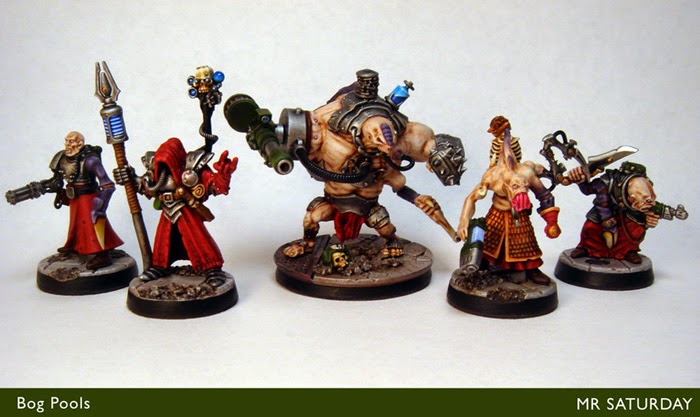 There’s a heavy dose of nostalgia in there for sure. Games and miniatures I missed out on as a kid and sought out as an adult. Some aren’t even that great. I spent years looking for a copy of Curse of the Mummy’s Tomb, which is essentially 3d snakes and ladders. On the other hand,  Fury of Dracula is brilliant. The art style of the period is very appealing too.

Another draw, miniature-wise, are specific artists and sculptors like Ian Miller, John Blanche, Bob Olley, Jes Goodwin, Bob Naismith and many others. I find miniatures from mid to late 1980s era, specifically Citadel Miniatures, are loaded with character. The Jes Goodwin chaos champion or Aly Morrison undead ranges are exemplars of the period, with each miniature an individual. The later plastic ranges, while technically excellent, lost some of that individuality. It’s even more apparent with the advent of 3d sculpting. The model is taken out of the hands of the sculptor, and it makes a lot of the 3d constructed models look similar. It seems more difficult for a sculptor to implement their own style through 3d modelling, but as technology advances I imagine this will change.

Then again, I love the original plastic space marines, which are about as detailed and individual as staples, so what do I know?

With the retro thing being in fashion right now, and the formation of the Oldhammer community over the last few years, I’m starting to see a lot of miniatures coming that hark back to that early style. It’s a bit of a golden age right now in fact. 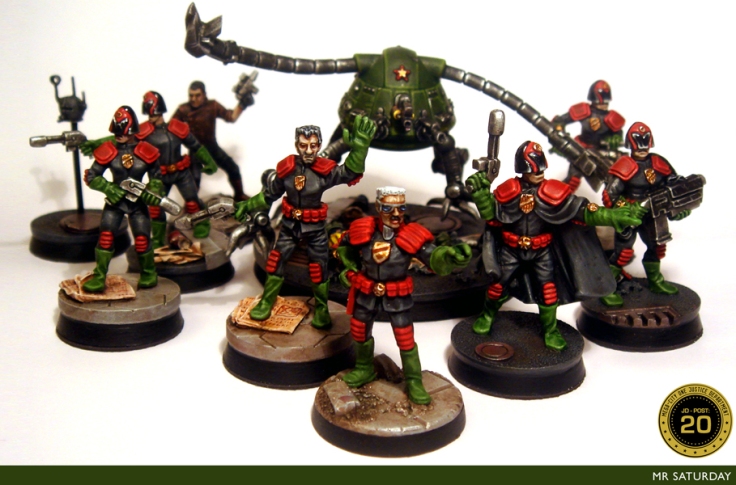 Ooooh, I’d say my fimir army. I had the idea rattling about in my head for years, and it was very gratifying to get it out of my brain, built, painted and on the table. There were very few fimir models to choose from, so it’s mostly converted or in some cases sculpted from scratch. It picked up a few awards, which was pretty damn nice too, after all the work. I do have another project coming to a close now which was something I’d wanted to do for years, which was work with one of my personal heroes, but I can’t say too much more about that one for now!

Well, most of my friends and family are, or have been gamers, so it’s not much of a thing. As for the rest, at this stage it’s regarded as a mildly eccentric obsession that’s best avoided lest I talk about it for several hours.

Oh, I’d love to develop some model ranges, maybe do some game development.

Or be a space pirate.

Course it does, it isn’t an either/or thing. Gaming with a bunch of mates of an evening is a different beast to online gaming. There’s all the paraphernalia of traditional gaming too, the box, the models, the counters, the snacks… lordy, that sound good.

Also, new game smell. You guys know what I mean.

Find a group if you can. If not, find one online. Gaming thrives on social interaction, even painting needs feedback from others. I’ve made friends through gaming that have become close, life-long  mates. It’s a bigger hobby now too, so it’s easier to find like-minded folks at game shops, cons and events, such as the awe-inspiring KnaveCon.

It’s a tremendously rewarding hobby, so roll up your sleeves and dive in, there’s honestly never been a better time.