If you read the bgg forum on this game you’ll see a post for a “less nasty version of the game”… So it’s extra nasty as standard… Quick. Swear me in

Tammny hall sees up to fiver players battling it out for the most prestige in the 1800s in a gangs of New York setting.  More accurately it’s an area control game not a million miles from el grande but no bad thing for that.

The rules cleverly unfurl as the game progresses. You start with pretty basic options and a third of the board available. As it progresses more of the board opens up GTA style and a few additional rules are introduced. It’s a lovely, gently way of learning the game. Don’t let that fool you. This IS a nasty and unforgiving game. Twice I’ve played and twice I’ve been hammered soundly. 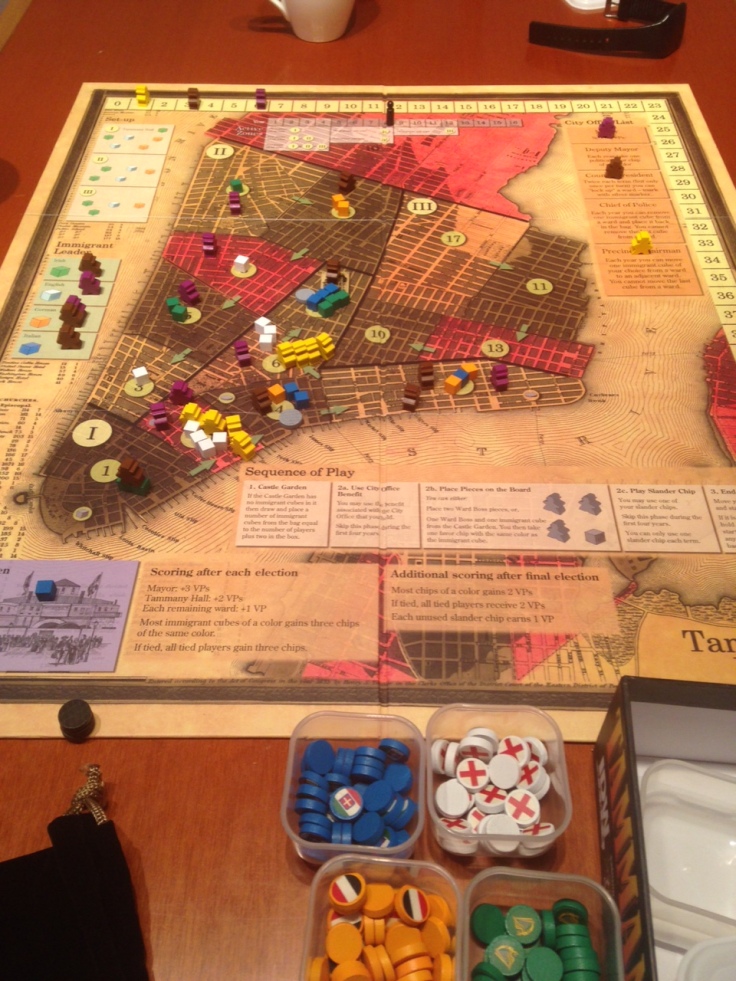 The game is played out over sixteen swift rounds with elections at the end of every four. The elections double as scoring rounds.

Congratulations your problems are just beginning and you’re the author of them.

After an election having the most amount of immigrants under your sway will grant you additional favor tokens. These are all critical as the game progresses

Once the first election is done the hapless mayor (having received a few bonus points) has to elect the other players as his officials and then settles in with no powers whatsoever for four more years of treachery.

The other officials now have different powers depending on their role to move around immigrants or remove them. Lock up areas of the map and gain bonus favor. The mayor gets nothing after the 3 point golden handshake for winning the election.

After each election more of the city opens up for you to win hearts and minds and the option of slander becomes available whereby you can eject rival opponent ward bosses from shared and adjoining areas.

I really like this game. It’s surprisingly fast. It’s surprisingly simple but it packs a heavyweight punch. There’s elements of several games here not least of which is twilight struggle with a the whole expanding map and sector control

So I’ve gotten to play with three and four players but I reckon five is where it’s at.

I’d been told it was good and the teller didn’t lie. This is a great little game. Far better than others in its genre. Even though it’s out of print it’s worth having a look for. It will definitely be front and centre at the next knavecon