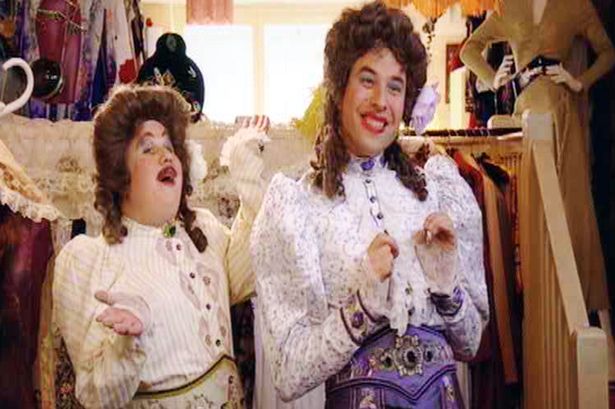 I don’t think anyone expected to be playing Ladies and Gentlemen (well obviously the owner). It’s certainly different. Bought for a mere bagatelle at the Knavecon bring and buy it reared it’s Victorian head on Thursday last.

The game sees up to eight players (we had seven) working in groups to become the most talked about Gentleman or Lady in polite society come the big ball.

Teams consist of well to do gentlemen and their ladies and well me. I was the odd one out so my role in the game was …. well let me put it this way, I’d stand out at a wake…

Players score points by having the best dressed wife at the end of the game and can be boosted or undone by the look of the courtesan who is every gentleman’s friend. This is achieved by buying the best possible outfit for the aforementioned ladies

Outfits consit of hats, dresses, accesseries and an entourage of servants.

Each of the men folk each round dabble in the stock market which sees them picking resources from a collective pile to complete a set and earn money.

The ladies each of which run a shop stick a pile of cards face down with one face up showing various dresses, bags, hats etc and their cost. Ladies then secretly decide which shop to visit and fight it out black friday style for the choicest of items handing them to their male counterparts to either buy or reject. (pouting is mandartory). The courtesan can ask any of the men to buy goods for her but the men in doing so have to keep their wives sweet by buying them something of similar value. 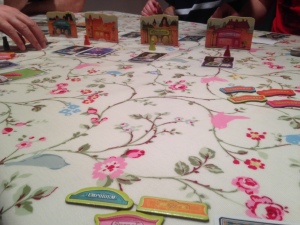 The game ends after a number of rounds with the best dressed couple winning and the least generous types falling to the wayside.

It’s an Interesting game. Possibly not the best fit for a group of seven lads with schoolboy humour sensibilities

It’s a game that requires a few goes before a strategy would emerge and while I can’t say it was stupendous fun I reckon a few plays would make for quite the fight. I also think it would play better with a few actual women in the mix (possibly a real couristean as well)

I had not heard of this game until last Thur and it’s possible we may never play it again but I do feel strongly that I don’t feel strongly about it one way or the other.  Once again it’s going to need more play before I can decide if I like it or not.

Huzzah! (as we ladies say)

2 thoughts on “I don’t like the look of yours”