“Victor how come there isn’t a mark on any of the rule books for you games?”

It’s true I’ve been accused of not reading the rules before starting games.  It’s a filthy lie, I ALWAYS read the rules, perhaps a few times before I put a game out to play.  Now that said I may have READ the rules but that’s no guarantee I have a clue what the rules mean

So last night was no exception.  I read the rules for Netrunner a carefully, I read the cheat sheets, I even watched the tutorial videos a few times.  I carefully punched and bagged up the games and everything was ready to go…. took a while to figure out though. But I digress first up was Cards Against Humanity 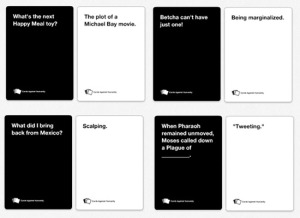 This is pure and simple, adult Apples to Apples and just like that game you play the person not the game.  it’s fantastic.  Great party game, easy to learn and is gut bustingly funny.

It’s a perfect game for non gamers.  be warned it will offend some people (whomever they are), it’s quite adult

Next up whilst the lads had a go at Ticket to Ride (I hate ticket to ride) Someone who drew the short straw got to play den den DENNNNNN NETRUNNER agin me.

It’s really worth having a look at the video tutorial and you’ll get it pretty quick.

The Corporate player sets up agendas and assets that will give them score and resources (the resources in the game are credits and clicks).  These are set-up on remote servers and are protected by ICE to stop hackers getting at them.  There’s a certain about of bluffing insofar as the hacker doesn’t know what each server contains, it could be an agenda an asset or a trap.

The hacker spend their time building up their assets (hardware, programs) and when they choose they can do a run to disrupt a corporation server.

It works really well, I’m dying to play this again and as we learned the game the turns whipped along pretty fast.

We were only scratching the surface last night as the game comes with a number of corporation and hacker decks and as you learn the game you can configure the decks to your best advantage.

NOW unlike say Magic the gathering this is a living card game so when you buy it it’s got everything in there, you don’t need to buy a dozen decks to get a half dozen cards.  I like that idea and fantasy flight are old hands now at this format

Production values on this game are excellent as you would expect with FF.  Card Quality, Artwork, everything, it can’t be faulted.  There’s also a stack of expansions already out.

It’s set in the Android universe (very bladerunner).  I played the original Android game some time back and it never really worked for me even though I really wanted it to but I’m glad to see FF are using the same IP again just like they’ve been reusing their Twilight Emperium universe for new games like Rex.

If you’ve looking for a good two player with a good level of complexity I would highly recommend this.  Make sure to read the rules. several times.

More of that next Thur