There are effectively two types of game nights, good nights and great nights.  Last thur was a great night.  We got a good group together and played some damn fine games

First up for me was Love Letter

I’m a big fan of simple games, and this really is simple, 16 cards (15 really because you remove one before you start) and away you go with 2-4 players, over several rounds.  The idea is to finish with the highest numbered card in a round and therefore win favour with the Princess either that or eliminate the others players in the round.  do it four times and you win.  Remember Fibonacci series in maths? it’s a bit like that where the previous played card affects the next played one.

I was introduced to it’s charms at Knavecon and was hooked after a couple of games.  It does take a few games to get your head around it after which you’ll be won over.  It’s also dirt cheap.  €10 or so and it comes in a nice bag.  What more could you ask for?

Next up was BOSS MONSTER 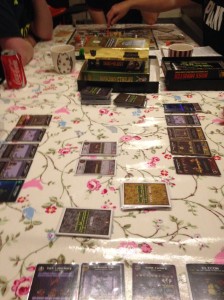 Now THIS is something special. I WANT Boss Monster.  I’m going to go and seek out a copy asap.  It’s brilliant.

You start with the aforementioned Boss Monster and over time build a dungeon with traps which attracts increasingly powerful adventurers who’s souls you want to take (by bumping them off).  It’s a bit Dungeon Keeper, bit Tower Defence.  The real fun is where you stick a spanner in someone else’s works just as they’re about to bump off said adventurers.  Typical ploys involve deactivating an opponents trap, buffing up a wimpy adventurer or a variety of sneaky nasty tricks all of which make for a brilliant gaming experience.

We played one game that lasted over an hour and it was a riot from start to finish.  Everyone came away wanting more

While this went on the other group got to grips with a game called TRIPODS which is in beta, I didn’t get to play it but it looked really good.

Next was an old classic.  Mag Blast.  Truth be told we’ve played a LOT of mag blast and although it’s a super game it can drag on a bit and this was no exception.  Also I didn’t win so it’s a silly game and we’ll never play it again 🙂  Oh and no-one made the sounds so it doesn’t count

More of that sort of thing

2 thoughts on “Last Thur – Being a Drax Report”