It was summer, we had a smallish group and young Borys had brought Augustus

“It’s up for a speil award”

“how long does it take?”

Augustus plays a bit like Stone Age if you can remember that.  Each person gets a set of three which have a number of icons on them.  One person draws random icons cards from the bag and everyone tries to match them up.  If they fill their card they shout out “AVA CEASER!” and collect a reward either in score or extra ability or a bit of feck up your neighbours plans.  Now this is the way it’s supposed to work however the group being the mature people they are couldn’t help but shout out BINGO! when they completed a card or “BINGO MAXIMUS!”.  Once you complete a card you get another one from a communal picking track in the centre and you rinse and repeat. First one to seven stops the game and you count up your score.  There’s shades of Stone Age, little bit of Settlers and it’s grand and dandy. There’s a little bit more choice wise to increase your score and decisions to be made.  NOT a huge amount of cock blockery which is a pity.  I’m not a fan of solitaire type games.

Not a fantastic game, not a bad game.  A very good kids game I reckon.  I’d play it again definitely but I wouldn’t rush out to buy it.   We couldn’t see it winning awards but what do we know 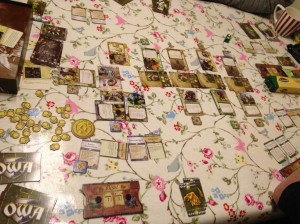 Blood bowl Team Manager.  Now I must admit I didn’t remember a whole lot of rules for this game. I THOUGHT it would come back to me but it didn’t so I punched the game and JUST as we were assembling the dials fortune shined on us.  A passing gamer and his son who knew the game inside and out from many rainy days play dropped by to say hi and coached us in this nice little game.

Bloodbowl Team Manager is a clever little game in the style of Iliad.  You have a limited amount of player cards and you try and score as highly as possible in a match to carry off the prize.  It’s a funny one insofar as it’s difficult to explain but once you’ve played a game it sinks in and you can play away without issue after that.

We’re BIG fans of Bloodbowl (we’ve a new big league of the computer version just kicking off) and this captures the spirit of the game nicely without becoming bogged down in the long game.  It’s fairly short (If I can stop talking long enough to take my turn), it feels like bloodbowl, the production quality of the game is excellent and it’s very much a direct in your face game…… and for some reason I still can’t warm fully to it.  I don’t know what it is but I should love this game and yet it falls short for some reason.  Not sure why.  I think it’s a blip I need to play it more and I’ll tell you what, I REALLY want to get my hands on the expansion.

I recommend this game.  It’s pretty cheap for a boardgame, it’s got quite a bit of variety and it’s clever. nicely different to other games.  I have a hankering to play it again so I reckon we’ll be seeing a lot more of this and the expansion soon

More of this sort of thing

Have been thinking about a second tag line for Knavecon and I kinda like  “Meet as strangers, leave as enemies” but I digress

It’s thur night so it’s gaming and thanks to a very nice fathers days present of Bloodbowl Team Manager we may well have ‘a bit a that’ tonight.

Now I must admit that I owned a copy of this before but due to my voracious game swapping addiction it got swapped out for something else (possibly some magic beans) and never got past a game or two.  I was nonplussed about it which was a pity because I LOVE Bloodbowl proper  (waits for comment about how I should learn to play it properly so) and it’s Fantasy Flight.

I really don’t think I gave this game a proper chance and coupled with the fact that there’s an expansion out now I think it would be churlish of me not to welcome it back into my heart.

So lets gird our loins and Play Ball ! 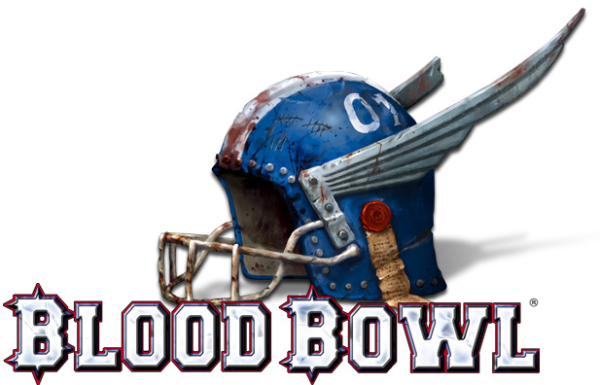 who’s interested in an OPEN bloodbowl league?  Have been thinking about it and I spoke to a few players from the current one and they’re all in favour of playing a second league in parallel.  HERE’S a suggestion.  What about an open league? where you get to play as many games as you like but you take your best scores and after a set amount of time you compare them?

Hold on now! don’t run away, it’s not as crazy as it seems and I have had several sentences to come up with a cunning plan.  The idea would be that you would play on the BB open league against your “friends” and develop you team.  You would keep a record of your wins and most importantly keep a note of the DIFFERENCE IN TV for the matches you won.  You would get the points different if the team was ranked higher than you and HALF the TV difference if they were lower than you in TV.

You then simple keep the three best scores and after that set time I mentioned above you add all three best matches together.

All you need is the PC game and some friends who play….