I had high hopes for Jamaica. I figured it would be at least as good as Pirates cove…. for sale in perfect condition Jamaica.

It’s very easy to describe a game as a kids game If it’s a bit simplistic. We do children a disservice if we do that. There are plenty of games out there that are perfect for kids but are equally good for adults. Jamaica isn’t one of them or if it is it will be short lived. 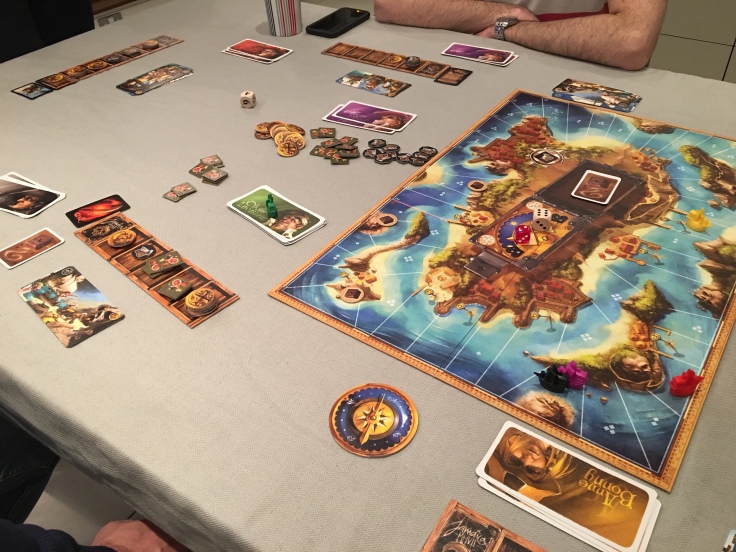 Jamaica is a lite race game where up to six players race pirate ships around the outside of the eponymous island. Each turn the first player (who cycles around each turn) rolls two dice and places them in the night and day section in the centre of the map. Players then in order pick one of their three drawn cards and activate their day and night action.

Actions can be move, increase food or increase gun powder. The amount they add is dictated by the night and day dice results so the first player has an advantage over the other stooges. The sizzle here is you only have five holds and you have to put the haul in it’s entirety into an empty hold or chuck overboard a hold’s content to make room. I can only assume this is to comply with health and safety Pirate code. 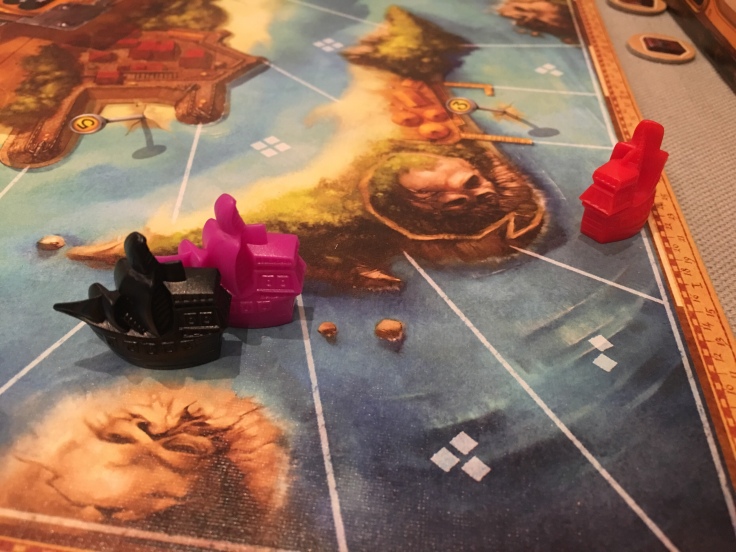 Moving to any spot on the map costs resources so landing in the open sea burns food, harbours gold and the occasional free pirates den gives you bonus treasure if you’re the first to arrive. If you land in a square and can’t pay the cost you stick on the hazards and reverse back square by square until you can.

Combat occurs no if buts or maybes If you move into a space containing another ship. Both pirates decide in advance how many plus ones to add to the dice by burning gunpowder tokens then add them to a d10 roll. Defender does likewise. Highest value wins. The map contains a couple of treasure cards that grant overly powerful reroll abilities, extra cargo space, hand size and pluses onto combat rolls along with plus and minus points at the end. The whole thing rattled on until someone passes the finish line then everyone freezes and scores bonus points for being close to or over the line.

The problem with this game is it’s just too random. There’s no possible strategy and very limited options. I’m not against random in games but in this case you could save yourself an hour and just roll a dice each to decide the winner. Battles are hit and miss (ho ho). You could be lucky and get around the board hitting the right resources and spaces a bit like snakes and ladders. It’s crying out for a decent set or advanced rules.

One thought on “A rum cove”