francis Drake is a worker placement game in a similar vein to Age of Discovery. You play the role of a sea captain who will undertake Three (not four not FIVE!) voyages to the West Indies to try and score more points than your fellow sea men. School boy humor will reign. 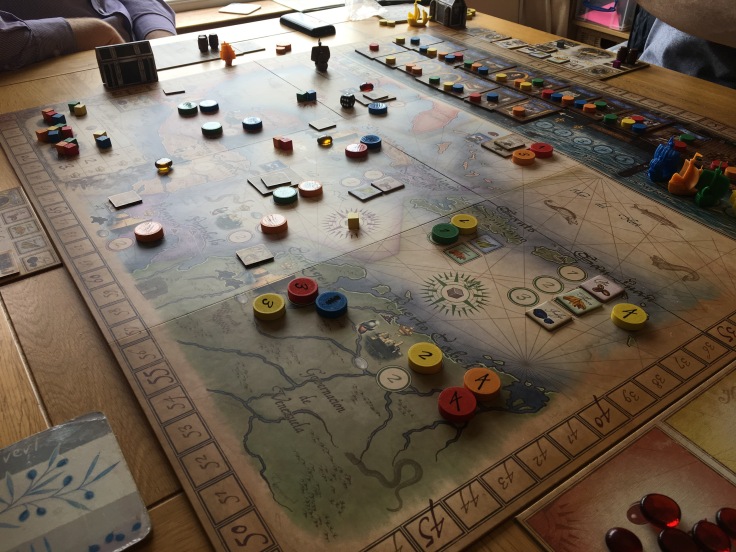 You do this by sailing over and knocking the shite out of the locals and half inching all their gear. Bonus points for conquering cities and fortresses. Each player gets a number of action disks numbered one to four and has to place them face down on various objectives. Once all are revealed it kicks off and first in line at the trough (if they overwhelm the locals) gets the best pickings. There are limited spots at each of the dozen or so objectives so carful use of your action cards and careful bluffing is key. In the event of two captains attacking the same location with the same initiative on their action disk it’s decided by the captain that left port and set sail earliest.
Overwhelming the locals is straightforward. They have a number of visible cannons and men and a turned over card with a few more. So you need to bring more men and guns to the party (which you then spend) to win the day. Additionally you need to bring supplies to reach further objectives, a bigger ship to attack galleons and trade goods if that’s your sort of thing. Where in the world can you find these useful knickknacks? Why back in port I’ll warrant ship mate.

The Voyages are split into two phases. The Victualing and the Voyage (which we just spoke about)
Victualing is akin to opening the doors of Willie Wonkas factory to a mob of Augustuses. Players rush to be the first to grab whatever they think they need from the dock side buildings before raising anchor.
The dock is a one way street of cards which grant access to men, cannons, supplies, trade goods, bigger ships and various other bonuses a jack tar needs. The sizzle is that the first to jump on a particular card gets the most of that particular resource with players arriving after getting sloppy seconds, treacherous thirds and possibly ferocious fourths. If you pass a building you can’t go back so it’s a balance between stocking up and getting to the new world first while all the good stuff is still there (sloppy seconds etc.) It’s a really neat mechanic. Buildings are a spread of various goodie giving cards and these change from voyage to voyage so mind how you go.

The game is really nicely produced. It’s big. The board is big. The pieces are big. The various chits are big. The box understandably is big. It’s a proper man sized no nonsense Tonka Toy board. I like a good board but it’s often a pain if you combine that with a big player board and sets of cards. I was delighted the player board was small and self contained bar a neat little treasure chest to store and hide your ill gotten booty. The art is good, nothing stellar but more than adequate and not overly distracting. The whole thing feels good and solid when you play it. It’s like a Volvo of a game.
Gameplay is excellent. It’s fun and competitive with little or no dice, just decisions and opponent’s decisions to decide your destiny. Cock blockery abounds but no direct confrontation with other players and this feels right. It would have made the game very unforgiving if you could directly attack others. It supports five which is a nice round number (I know) for gaming. There’s a lovely game of two halves here with a lot of thought and strategy required but not to the point of over analysis

I like it. It IS pricey but definitely worth trying out. One of the Thur crew has it so I should have a copy of it at Knavecon 10 and definitely it’s worth checking out
Decent game. Well worth your time
Huzzah!
Vic