Remember playing dots when you were young? Welcome to Android Mainframe! It’s a light, fairly short area control game, playable by up to four, set in the android cyberpunk universe.

A better analogy would be the old arcade game Qix If you remember it….. No? Ok doesn’t matter. It’s like that if you do.

There’s a theme in here too but I can’t be bothered digging into it. Each hacker starts with eight control tokens, a hand of three special cards and eyeballing the other players across an empty (very nice click together) plastic grid. To score points player have to do the following, stick down their control points then surround them with little (Catan road like) blue sticks. To facilitate this players draw from a face up spread of four cards. Each card shows either a Tetris shape of blue sticks the player can place or a tricksie move sticks/move control point one.

Once a player surrounds one of their control points it’s locked in place and cannot be changed. At the end the more space you control the more points you get. More so if you have multiple control points in it.
It’s quite tactical. You can’t capture an area of someone else’s control point is in it with you so cutting people off, moving their guys, changing their almost complete zone, basically being a dick is all fair game. Obviously I like it 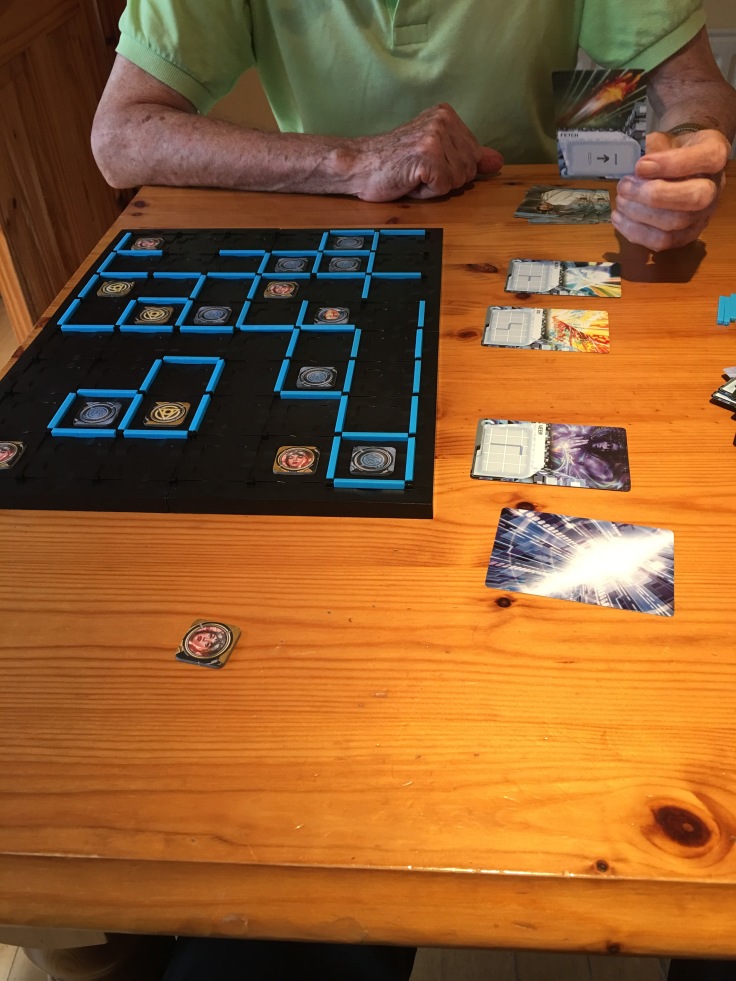 To add a little variety each hacker starts with three unique one shot fairly powerful cards from a pool of six. The game rattles on for twenty minutes or so until all the cards run out the it’s count your points.
Production wise it’s Fantasy Flight good. I really like the click together board with recesses for pieces. Art work is on par with the android card game. Pieces and cards are solid
It’s a good filler game. As always I’ll have it at the next Knavecon. Well worth a look