Well that’s a first. I logged onto steam late last night and my friends (steam friends) were all playing the same game, Warhammer Total War.
It’s been a long time coming. Yes there’s been modded versions of the various TWs but this is the first official one and it’s very welcome
Let’s cut this short. Is it any good? Yes. Should I buy it? Yes.
The game comes with four factions (dwarf, human, vampire counts, greenskins) and a fifth (chaos) if you buy it preorder or within the first week of launch.

Interestingly dwarfs are easiest to win a campaign with (if the difficulty setting is to be believed). I tried these first. The lack of cavalry was weird having played TW in the past.
I need to qualify this review. I only got a couple of hours in last night and it was only launched yesterday. The developers did a sterling job getting it back on the rails. The multiplayer servers were over subscribed to and it all went down but was back up again quickly. So as of yesterday evening everything was humming along nicely. Since I moved to a fibre area words cannot describe my Joy as the 10gb game downloaded in 15 mins. (I celebrated by texting my buddy who lives in a broadband black zone but he didn’t share in my joy) 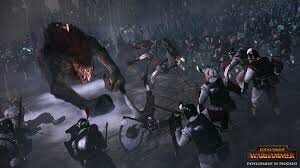 Graphically the game is a treat. Like all TWs you can dial the detail up to stubble on the chin level if you have the horsepower to run it or down to stockmen on bland backgrounds. The shine on the brasses and armor looks the business. Animations look great. The big units leap in like Sauron and knock everyone flying. Heavy weapons knock troops like nine pins. Troops move “right”. All of it looks just as you (well me) expected these units to move.
Now I have to qualify this which I will soon but multiplayer campaigns seems to only allow two players which was disappointing. I was envisaging eight player month long campaigns but that ok. I have a backup plan to run that part outside the game.
You can play one off battles against each other and AIs as normal
The economy is much simplified but there is a good tech tree and the campaign map is dramatically realized perfectly for the source material
Needs more play which it will get. Check out http://www.cdkeys.com. I picked it up for €36.69 rather than the iron price of €60 from steam
More soon
Huzzah!
Vic