I’m a big fan of Fury of Dracula. More so when I’m playing the big man himself. I got to play third edition and I have mixed feelings about it.  Mostly because I have won a game. YET
I’ve had second edition for a long time and I was wondering if third is a better bet. I had mixed feelings about it :). Didn’t help that I got hammered when I played it by a lucky card from one hunter. 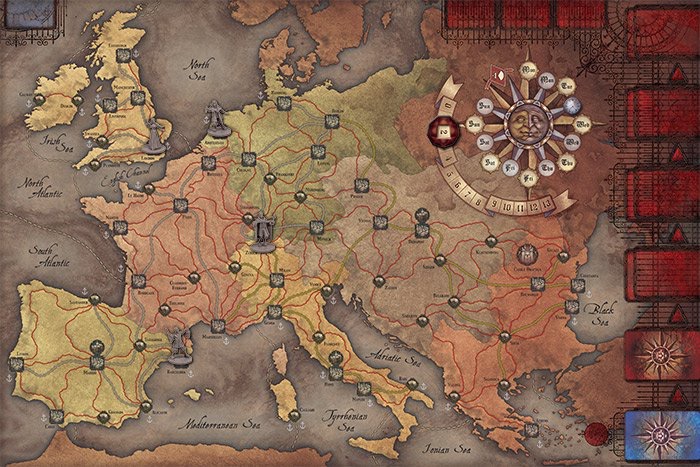 There are quite a few differences from the original and quite a bit left the same.  All said I had forgotten how many rules there are in the game. All worth the effort though
If you’re unfamiliar with the game. It sees one player taking the roles of Dracula who sneaks around avoiding the hunter players, laying traps (encounters), killing hunters, raising more vampires and generally leading the hunters a merry and hopefully fruitless dance before winning on points and high fiving the children of night
That’s the theory. My experience varied a little from that. In the last game I got Rodney Kinged by all four players at once. Now here’s the thing. I’ve lost two games being Dracula and I’ve played Dracula a lot so this game is quite a challenge, the hunters have upped their game or I’m not the vampire I used to be. Probably a bit from column a b and c. Any road up I’m eager to stick on the tux and do it all again asap

If like me you’ve played second Ed you’re probably wondering if it’s any better and should you upgrade. A good question
Here’s the basic changes
Night and day happen every turn. Didn’t like this. It used to be more strategic now it’s pure luck if you meet the hunter at the right time. Night and day are also not as important as they were.
Combat has been revised. More streamlined. I did like this. Out goes the dice. In comes the rock paper scissor style matchup

Gone are some of the stupid cards like the Nina harker GPS locator and the Dracula teleport. I don’t miss those.
Is it a better game? Yes. Should I rush out and buy it. Yes. Unless you have second Ed in which case you’re there or thereabouts already and there just aren’t enough changes to justify it
Still a great game,still a lot of fun still happy to play it at the drop of a top hat.

One thought on “Fangs but no Fangs”