Series 6 of Game of Thrones is coming in April. Entirely unrelated we played Game of Thrones for the first time in well over a year. Maybe two.
This is a game that’s been around for a while. In a lot of ways it’s a sacred cow of games. The IBM, the Volvo. Solid. Well formed and we found to our surprise a bit more boring than I remembered 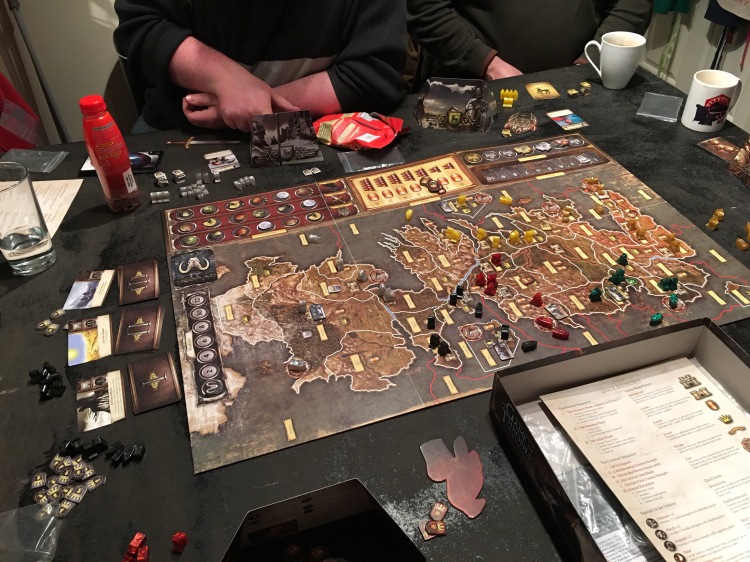 Game of thrones is an area control map conquest game based on the world and map of Westeros. You control one of the six families from GOTs and compete to be the first to control eight castles or part there of by turn 10.
Each turn firstly sees a series of event cards happening which will elevate and possibly kick off a dangerous wildling attack.

Then it’s planning, where you put action tokens secretly on your troops. These actions can be move/attack (obvious), support another armies attack or Defence, defend, raid (screw up someone else’s support or raid) or consolidate power (gain political power tokens).
All tokens are revealed and one by one they’re resolved by each player. It’s sort of like winding up the board and having it slowly unwind. This is where all the stabby stabby happens.

Political power tokens are a useful currency for bidding for control of the iron throne (adjudicates on draws), the valerian sword (turn order and +1 attack value) and the Raven (allows a change or orders and dictates how many special actions a family can take)

It’s a nice game, the theme is… Fine. None of the participants actually feel like the books or the series. It could as easily be Elsa from Frozen as much as John Snow in a battle. There’s no variety outside of their starting positions. The problem I have with this game is not that it’s a bad game (it’s a good game) it’s that more refined versions of this style of game have come out since it’s release. Forbidden Stars is a much better beast. If you combined the rules of forbidden with this setting you’d have an amazing game. As it stands it’s a fine and venerable old warhorse that’s being superseded by newer sharper kids. That said I have a soft spot for it so it’s not going to disappear from my collection anytime soon
Huzzah!
Vic