Remember the romance and adventure of the old pirate movies? The sword fights, daring escapes, adventures on the high see? Bad news Letter of Marque will leave your Buckle decidedly unswashed.
Letter of marque is a filler game. It’s simple, it’s card counting and a couple of games later it will be gathering dust or thrown into the buy and sell at Knavecon. (Guess what I’ll have in the buy and sell and be trying to convince people is a great game?).
Players start with five little plastic ships, five treasure cards and three cannon cards.

The objective is to score points by either getting your treasure home safely or hijacking others.
Of the five ships you have, two are armed, this is indicated by a recessed cannon symbol on the bottom of your little iron, sorry ship.

During a turn you can launch a ship, land a ship or attack someone else’s ship. 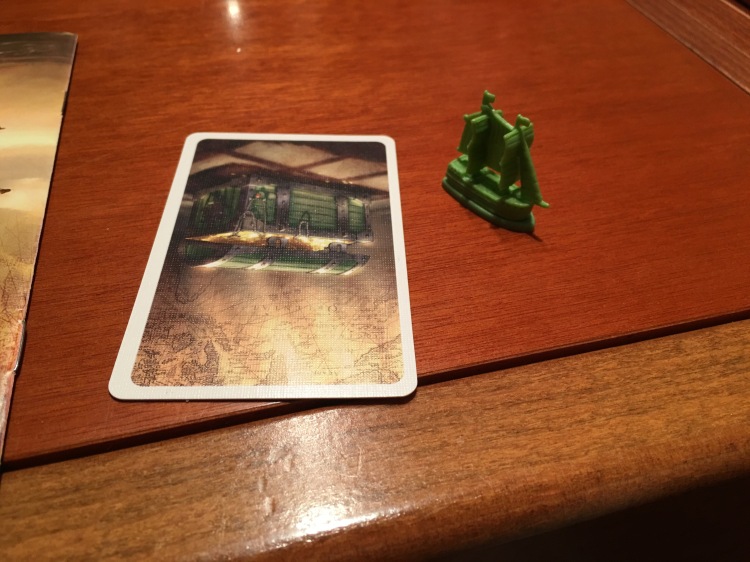 When you launch a ship you stick one of your treasure cards under it visible to all. What people don’t know is if the ship escorting it is armed or not.
You can land a ship, pulling one of the ones you launched back to your side and taking the treasure
You can attack an opponent ship that was launched earlier. You burn one of your three cannon cards and turn over the ship. If it’s armed you fail your adversary takes that cannon card and adds it’s one point value to his treasure hoard. Succeed and you grab that treasure

So in essence it’s a guessing and card counting exercise with a nautical theme tacked on. The tacking on is not the worst I’ve seen, it does feel piratey but the game play is just too simple for our sophisticated tastes. Everyone who’s played it has been pretty ho hum about it
So all in all an also ran game
Huzzah!