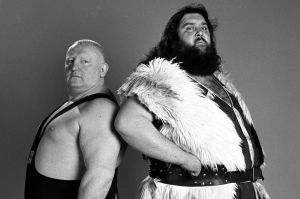 When I was a kid I used to watch British wrestling on Saturday mornings. Giant haystacks eh.. Other fellas and that was grand and dandy. It was a diversion, I knew it was all made up and I was nonplussed by the whole thing

Now I have some gaming buddies* who LOVE wrestling or more accurately watching others do it OR they did like wrestling when they were younger. I never really got it maybe that’s why I’m nonplussed by luchador. It could also be that it’s a bit too simple and samey or a couple of games are not enough to appreciate it. Either ways it’s not beeping my jeep

Luchador is a dice based combat game where wrestlers duke it out in a small cardboard ring WWE style. It’s small, portable and fairly cheap. It’s ok. It’s just ok. Bit like bread ,grand but nothing to get exited a about 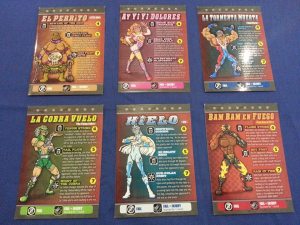 You can play tag team matches too which is the standard game plus a couple of extra rules for tagging out. When I see rules written like you must high five or it doesn’t count I groan internally

The idea is to land your dice inside the ring and hopefully knock your opponents out. Only dice in the ring count. There is Zero skill in this just blind luck

The dice have a number of sides

Misses miss. Counters change an opponents hit into one for you. Blocks block a hit and pins can happen if the opponents energy is low enough.

You can reroll pins.

Get a hit and you roll a damage dice and hopefully reduce your opponents energy a bit. Get two hits and you can roll a special move that May or may not do a lot of damage.

I would really like someone to tell me I’ve played this wrong or there’s an advanced set of rules that make it better but for me anyhoe I wasn’t gone on it. I thought it was as skillful as a national lottery game and just plain dull.

I’m sorry but not for me

I can barely Huzzah!