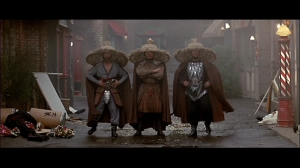 If Tsuro was a drink it would be a shot, something quick and giggly.  Not something you’d sit and nurse for the whole night, nor something you’d savour.  It’s fast, it looks good and you can be easily talked into trying it.  There ends the analogy.

There’s a limited amount of games you can play together with eight players, too few for werewolf, too many for most table top stuff and extending a game to allow eight is a recipe for downtime and disaster.  Tsuro takes eight, it works well with those numbers but it’s not something you’d play more than a few games of.  It’s just too flimsy, but it’s fun while it lasts.

The game itself is beautiful, it’s got just the right amount of quality without being expensive. The artwork is really nice, it captures the feel of those old Japanese bamboo painting rolls.  The pieces, all eight of them are solid and minimalist, the cards straightforward and simple.  It’s a work of art.

The game itself is very simple.  So much so that there’s only limited skill to it, but it’s still fun to try.  Each player starts with 3 tiles with a number of paths marked on them (If you’ve play Tongianki you’ll get it straight away) and a stone (their piece) at the edge of the board.  The board is a lined playing area with room for 49 tiles to be laid in a  7 x 7 arrangement.  As you place your tile you move your stone forward along the path you’ve placed.  If it collides with another player or goes off the edge, BONG that it.  And that’s the game.

There’s a little skill in

1. Staying away from other players

If you do get near another player prey you have a card that will send them off to an early shower and you to continue on your way.

On the plus side it’s easy to teach new players and kids will love it.  There’s a newer version called Tsuro of the sea, I’ve never played it but I’m sure it’s better and seemingly it’s got sea monsters so win win.

Try it at the next Knavecon, I’ll bring it along

Right that’s enough of that, serious boardgames next time

4 thoughts on “We also played Tsuro”