We (well I) decided to play Struggle of Empires on Thur.  It’s a game I’ve been interested in playing for some time and it was worth waiting for.  The rules were carefully read, squinted at, cheatsheets downloaded, read, read again, misunderstood, read again and finally tried out

The group has had a taste for longer games having played a lot of shorter ones of late and this one (unlike Rex) looked like a winner. 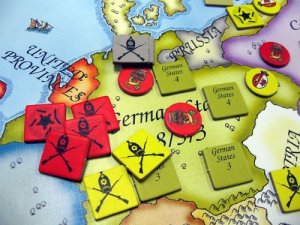 Let’s get the bad stuff out of the way straight away.  The biggest problem with Struggle is getting your head around the rules.  If you’ve gamed for a while you come to it with preconceived notions on movement, support etc. They’re all wrong.  This is NOT risk, this is not Diplomacy it’s something different.  Add to this the tutorial videos online (some blokes with beards blabbing on about how it doesn’t represent the real 19th century, for four hours) and you really have to play it to understand it, then play it again.

The game is (remember it’s just a game not a simulation) a representation of colonial power in the 19th century .  It plays out over a series of 3 wars where each player gets to build and move troops, build improvements and exert their power across the globe.  It’s a hoot.

The war starts by bidding on allies so you know who won’t be stabbing you in the back during THAT war.  then it’s straight to the ships and getting control of the world whilst more importantly denying others the same.  The battle mechanics are simple and fast.  once you get your head around the improvement cards it’s got a lot of depth and it really is a struggle to balance unrest, gold and troops (a feat I couldn’t do).

I really liked the movement rules.  if you have a ship somewhere you can go there, no turtling in the corners, no building up steamroller forces.  It’s constant war from start to finish and it’s gloriously fun with lots of vengeance and sneaky play.

I’m eager to play this again, in fact I wouldn’t be shocked if it hits the table next thur.  As for time it really did whip around after the first war where we were just getting the hang of it.   There’s very little down time, you’re either doing it to others or hoping not to be on the receiving end in someone else’s turn.

I like it, I want more of this, I will rule the world

2 thoughts on “Struggle of Thur – Being a Drax Report”