It was high noon (8:30) and the folks in the homestead had fixed a mess of food (put on the coffee), reckon it was time to play Way out West

But before any of that could happen we had to play

I got this as a swapsee and I can see why it was swapped to me. It’s grand in a sort of Bread is grand kinda way. I had not strong feelings about it one way or the other and I’m sure it will hit the table again. it’s a bluffing/guessing game with a bit of card counting. nothing special and it has ships in which is always good. it’s very quick and we flew through 2 or 3 games of it before the main event.

I like this game and want to play it again. It’s pretty past. there’s a LOT of in your face aggression (although we may have taken this a bit far as there wasn’t a whole passel of development, just a few wounded cowboys and a lot of cattle and tumbleweed at the end). It’s a semi worker placement game for want of a better term. it’s not so much about cock blocking other locations on players although this does play a part, it’s more about and a lot of fun for that russeling cattle, muscling in on other players patches and generally causing mayhem whilst trying to maintain your own economy.

It’s great fun, it really is and the cowboy theme works really well. The rules are very straightforward although the original ones in the box are a bit confusing and a better set can be downloaded from BGG.

There were shootings, stagecoach robbery, rebranding of cattle, sheriffs killed and banks robbed. Not bad for the first turn. Newton got behind and being the decent group we are we picked on him continually for the whole game until he was eliminated. Always kick a man when he’s down just in case.

Drax (an expert in cattle and cattle prevention) started to slip ahead but was brought under control by the combined agreement of The enemy of my enemy is my friend for this turn or at least until he does what I want and then he’s my enemy again. Cattle swapped hands a lot, there were a LOT of shootouts, truth be told I don’t think a single turn passed without one and in the end… I think drax won it. Strong cattle management and stronger muscle and bully tactics won the day 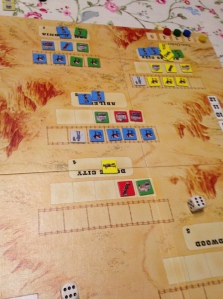 So after that and with a little time left we had a lash of half Tishu (500pts).

Great game, team Awesome split and fought against each other and despite some nice play by the weaker half of team awesome , good prevailed and I won (I mean my team won). Drax lost. Cosmic Balance was restored

More of that next Thur