Great night of gaming last night, we we’re joined by a newly driving gamer whom I hope will make it out to us again, but not win so much.We’re a friendly bunch of gamers and the thoughts of aggressive play, cock blocking another player or backstabbing was abhorrent to us 😉 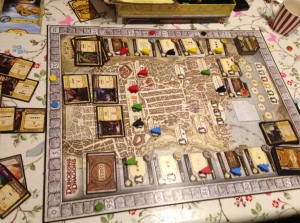 This is a fantastic game, I’ve mentioned it before on the blog but it combines worker placement with very direct player interaction.  There’s something a bit special about this game, it’s very much more than the sum of it’s parts.  It’s fast, component quality is excellent and it’s fairly tense and exciting.  Nothing like edging past a player at the end to steal a victory.  Not that I’d know about that as I got hammered every which way in the game last night.  Borys took and early lead with Paul doing suprsingly well and me slowly bringing up the rear.  Drax and Kieran battled it out with Drax sneaking ahead with the normal *gentlemanly* behaviour we’ve come to expect.  At the end of it we didn’t really care who did it, could have been Borys probably was in face however the real battle was between myself and drax and I won it! took a photo of the win and then somehow Drax magiked a card from under his section and realised… “Oh! look another 4 points putting me . . . ., ONE point ahead of you vic?”.  It’s a stupid game, played by stupid people 🙂

After that we HAD to have a crack at 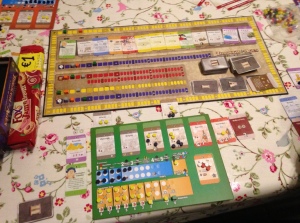 I’m a HUGE fan of this game.  it’s a bit fiddly, it take a while to learn, and it’s a long game especially with new player but WOW, it’s incredible.  The more you play it the more you like it.  There is a Lot going on in this game.  It’s best in my opinion to play it online to learn it properly because a full cardboard game of it can rattle on for quiet a few hours.  we game it three of those and it still only got 2/3 of the way through.  Like every time we’ve played no-one wanted to quit but we were forced due to time contraints.  In the end Boris was ahead but it was such a good game that was neither here nor there.  I reckon it will have to come out to play a Bcon.  The jam biscuits btw in the picture are not part of the game as such.

So good nights gaming, everyone happy

See you all at bcon