We got to play Spartacus the boardgame last night.  It’s a cracker! NOTHING to do with the fact that I beat Drax repeatedly and went onto win.  It’s just a very nice game.  I feel it incumbent on me to make a joke about the above card so here goes, “There is nothing more reassuring than having jupiter’s cock in your hand”. So that dealt with onto the report

Spartacus is  a game of bloody combat, behind the scenes manipulation and all around cock blockery.  You hire gladiators and slaves, organise games and try and gain prestige from your actions while keeping others down.  Balance the books by betting on matches (you can’t bet against yourself btw), hiring slaves and playing intrigue cards.  Gain new equipment, slaves and fighters in the markets.  take opponents down a peg or five with intrigue and reaction cards. Fight epic matches and become the people champion.  All good Thursday night stuff.

The setting is excellent, it really captures the feel of the TV series (I’m told), it’s not a set of mechanics with a theme bolted on

The Gameplay is fast and direct, none of your solo play rubbish here, it’s direct and nasty, lot of options for cock blockery (pardon the pun)

The pieces are nice and solid (not up to the standard of fantasy flight but more than acceptable), plus there’s some nice pics of the slave girls

Gameplay is fast and straightforward, it’s great fun getting into the arena, just as much fun watching and betting and downright awesome watching an opponents gladiators being crushed.

Lot of routes to win

It really needs the full four to play in a balanced way.  It’s possible for one person to get ahead with a wrecking ball of a gladiator and dominate the games HOWEVER that may have been down to our lack of imagination when it came to screwing up other players

Would have liked to see a bit higher quality printing, it’s all fine but could have been better 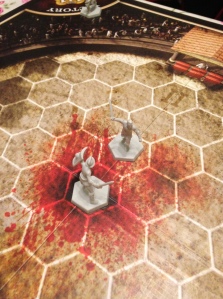 It started easy enough with a few starter gladiators and early on I won a bid for a trident (weapon) which proved devastating throughout since I could attack from a bit of range and dance away from counter attacks.  Drax went for a javelin which unfortunately for him did very little.  Mid-game I had a decent hero who was causing mayhem with his trident and Armour and beating all others in combat.  Then as is the way the others turned on me and started to hit me where it hurt my purse.  With no slaves I had to release a few of my fighters from their contracts and only some lucky betting kept my house ticking over.  Drax on the other hand with his large stock of slaves and nice abilities was coining it.  Boris slipped the clutch late game and only my jupiters cock (think humiliation card from lunch money) stopped him from winning along with SHOCK co-operation from Drax who’s normal rule of the enemy of my enemy is my friend unless it’s Vic was relaxed for a round.

All came down to a final match where I picked up a javelin and Drax and my champion entered the arena.  Early on drax landed a few choice blows and my guy was reeling.  It was looking like I would be leaving feet first when a chance throw from my Javelin wounded his hero and turned the tide a little.  After that I did better and managed to beat him to a standstill winning the game

Make no mistake this is a GREAT GAME.  it’s simple and fun, I’d rate it up there with Pirates cove or above, simple, fun and very enjoyable 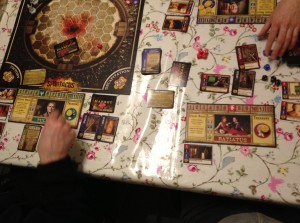