Let’s wish our plucky generals the very best! It’s going to be rough a ride! 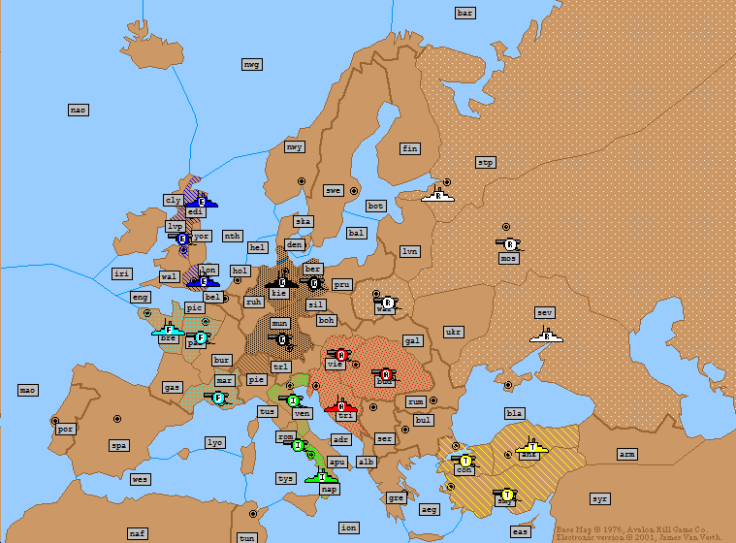 Knavecon in conjunction with The Board Game Group are now inviting plucky Generals to apply for a position in what will be quite simply….

THE GREATEST GAME OF DIPLOMACY EVER PLAYED….

Seven brave souls from all around the World will compete for the ultimate bragging rights using all their diplomatic and gaming skills to win this classic game. (Knavecon and the Boardgame Group are contributing prizes for the ultimate winner including a rather nice Trophy)

If you think you have what it takes then apply in the comments below and lets get this this show on the road. (those of a delicate disposition need not apply).

The game will be played out over the coming months and chronicled by our experienced GM team.  This is the first of what will prove to be an annual event

OK, so after a brief pause (of several weeks) here’s Turn 13 of Diplomacy

Russia still proving to be a burr under the saddle of Austria.  Turkey is dissolving like a compass point witch.  Italy is boxing clever with England.

Here’s the final position. Tune in again next <whenever> to see the end game of this long and unusual… eh game 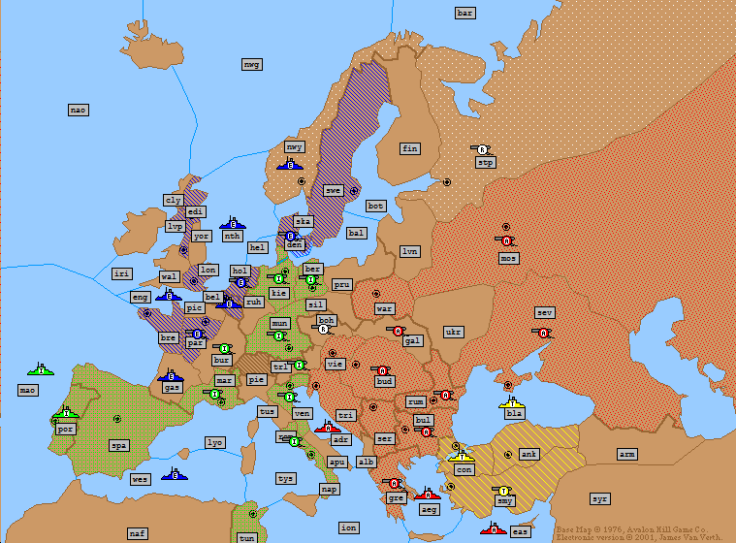 Nearing the end now, this has been a long and extremely strange game of Diplomacy 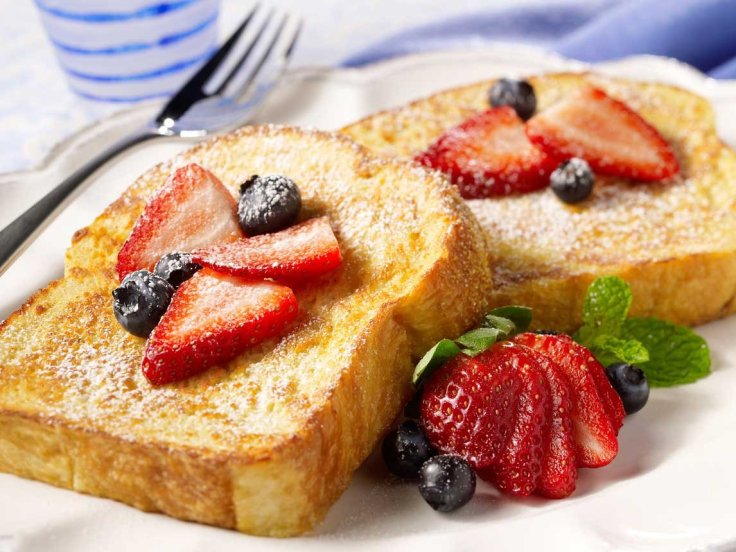 We bid a sad* farewell to France who was crushed mercilessly by the grand Italian army.  I’ve said it before and I’ll say it now.  This just doesn’t happen!  France is the strongest army in the game, Italy the weakest.  Italy is supposed to be the second quote, the also ran and what about Austria?!  It’s not supposed to cause mayhem, it’s supposed to die just after Italy.

Not much left now…. 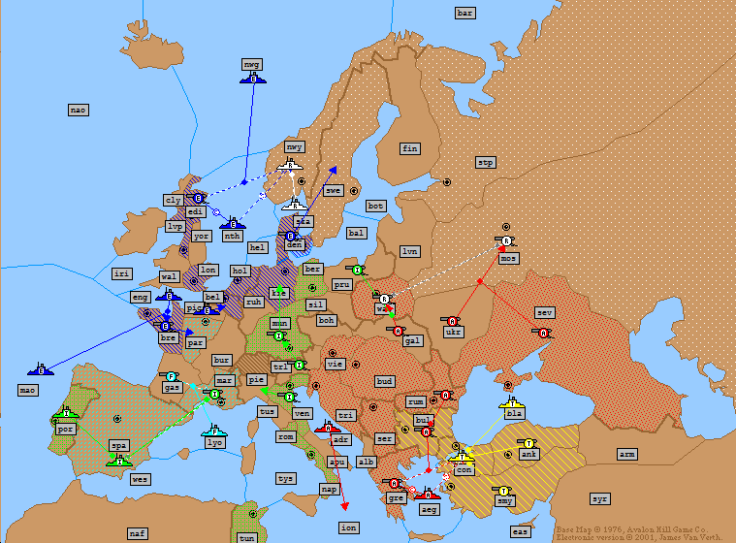 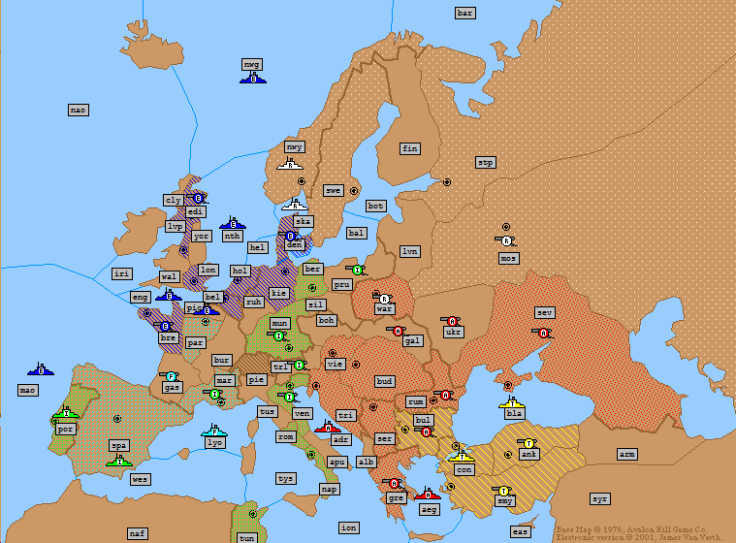 Italy and Austria defy all the bookies by continuing to expand.  France going gently into the night.  Russia not giving an inch.  Turkey fearing Austrian Christmas. England getting getting boots on the ground, slow and steady.  It’s anyones game still (by which I mean not France of Germany)

Very interesting game of Diplomacy.  Now in it’s 4th Year.  Usually at this point a clear winner would be visible but not in this case.

Who’s got what it takes to win this?  who knows!

I did say this was not your average game of Diplomacy.  Germany fell foul of well, pretty much everyone else early on and despite his best efforts never found enough (any) traction to get back into the game.

Well it didn’t end by Christmas, I didn’t think it would but you never know.  A most unusual game. 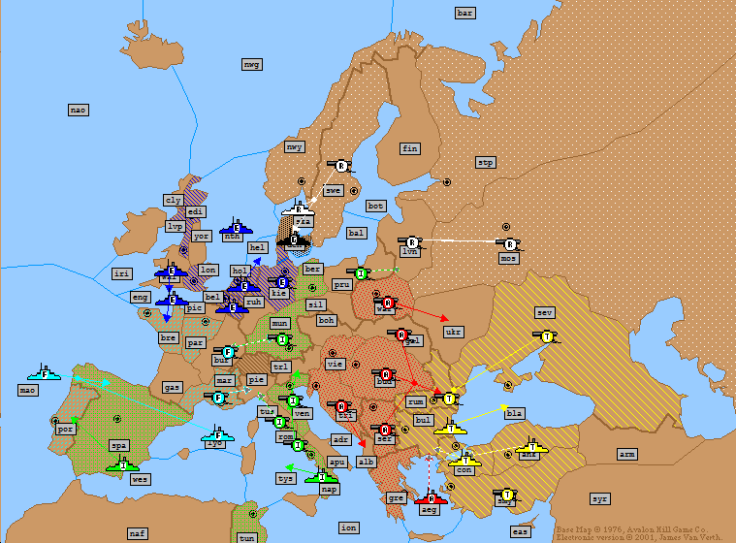 If you’ve ever played Diplomacy you’ll notice something odd…. Italy isn’t dead which is the normal course of events.  This game is anything but normal.

Germany is still hanging in there with it’s nothing to see here stance.

Seemingly, Napoleon wasn’t a small man, it was all British propaganda, France on the other hand is shrinking rapidly and may disappear with an audible POP.

Russia seems to be holding it’s own (never underestimate Russia).  Austria and Turkey have taken the shirts off, folded them neatly and are now circling each other fists a whirl

England is very much ruling the waves and fortress Britain looks impregnable.

I’ve never seen a game go like this, I’ve seen some odd stuff, but nothing like this, bravo! more of this I say! 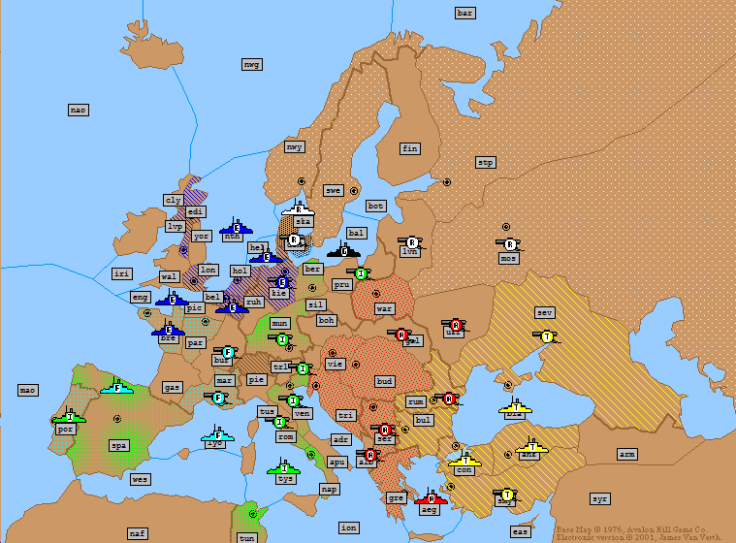 And there’s where it stands at xmas.  The diplomats are taking a well earned break for the holidays having gotten themselves this far. Germany despite everyone’s best efforts is spending it’s holidays in Denmark.  Italy is enjoying cheap plonk in the costa del dread pirate joe, Russia has gone North to take the icy waters, Austria and Turkey are getting to know each other better.  England is ruling the waves and France is doing what it does best 🙂

My predictions in a sealed envelope of the eventual winner is looking more and more shaky.  More of this next year.