I’m a big fan of Imperial 2030. Still my favorite 6 player conquest game by a mile. Antike 2 which I got to play recently is by the same designer, it’s a little simpler to learn and play but it still packs one hell of a gaming punch.
Antike 2 is a revised edition of the earlier Antike 1. A number of map and rules tweaks make it a tighter more balanced game. I haven’t played the first one but that’s the word on the street. 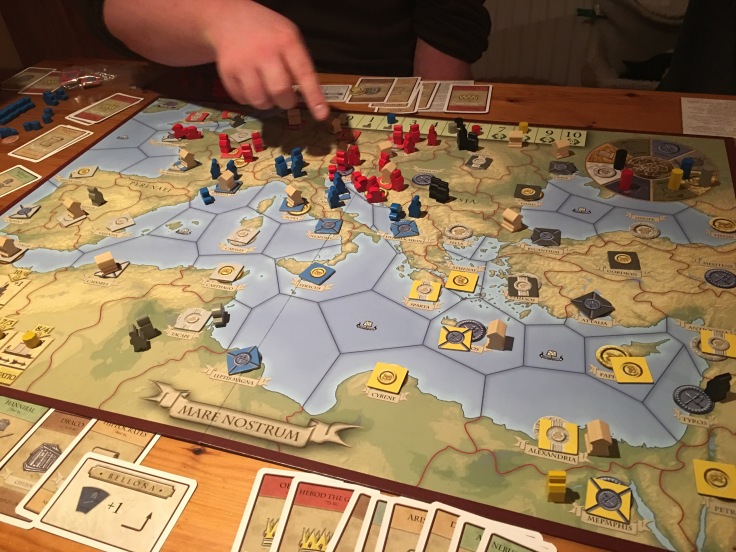 The game is a conquest game but the goal is not world dominance but getting a set of famous figures to join your faction through wowing them with your amazing feats.
The map (the board is double sided with a different map on the back) shows the Mediterranean split into a hundred or so sea and land locations with a variety of Latin names. Locations can be land, sea or a mix some with Marble, iron or gold symbols on them. You start with a gold, marble and iron producing city in situ (one of each) with a different setup depending on how many players are taking part(3-6).
The game plays out surprisingly quickly for a conquest game. Each player’s turn is snappy. You take one action and it’s brief. Then the next player take theirs. Truth be told some actions like harvesting can be done while the next player takes theirs. Turns are very straightforward. You can harvest one type of resource from the matching cities you own, build armies (with iron), build a temple (marble), research tech (gold) or move armies.

Temples are key. They triple the conquest, defense and deployment limit for a city. They’re also pricey.
Combat is simple. If two units meet and want to fight they wipe each other out. No if buts or maybes. Galleys kill galleys, troops kill troops. Bring more units than your opponent and you win a battle. That’s is. It’s not all about the battles like most conquest game.
In Antike you’re trying to impress those personages I mentioned earlier. You achieve this this by destroying enemy temples (everyone else’s), building multiples of temples, multiples of cities, being first to research a tech or claiming enough sea spaces with your fleets.
The heart of the game is the roundel at the top of the board. You move your counter clock wise around it’s ten actions and carry out the action you’ve selected. The sizzle here is that you can only skip forward three spaces a tuen so if you want to repeat another action (movement is on there twice) you have to wait or pay in resources to skip forward again. This is the same system as imperial (and a few more of the designer’s games) and means players don’t spam the same move again and again. A canny player could look at where players are on the track and figure out their next possible move and strike while they’re away from counter actions like building. It’s a neat neat system and I’m a big fan
Games are swift. There’s practically no downtime as you need to keep a beady eye on everyone’s moves. The missions make for a more intense conflict. You can’t afford to hang back and let someone else steal the personages. It’s intense but by no means a knife fight in a phonebox. You still need to build up forces and conquer but it’s to a specific short term purpose.

I still prefer Imperial 203 but that said I’ve played a hell of a lot of it and this is a welcome and equally excellent change. look for a game at Knavecon
Huzzah!
Vic