Santorini is a little different. It’s a beautifully presented game with an abstract theme set in sunny Greece. I didn’t read the fluff so I’ll make stuff up. You are trying to get up on the highest building to contact the gods ET phone home style. So are your opponents. First one high up wins.
The game is played out on a really nice raised five by five grid. Players stick their two workers on the grid (no two can occupy the same square) and take it in turns to move one dude then build next to either dude. The rules are simple you MUST move a piece each turn and you must built on a square. If you can’t for any reason you’re eliminated.

Building lets you either build on a blank square or build an existing building a level higher (no one owns a building they’re all communal).
You can move and build diagonally. When you move you can move up onto a building but only if you go up only one level (so buildings become like steps to get you up higher) To win you need to get up on a level three building which at first seems piddly easy but in practice proves not so. Other players as well as trying to complete their own ascension can throw a spanner in yours. Although buildings only go up three levels you can build a forth level in the shape of a domed cap which players can’t stand on thus putting the kibosh on their bold plans. 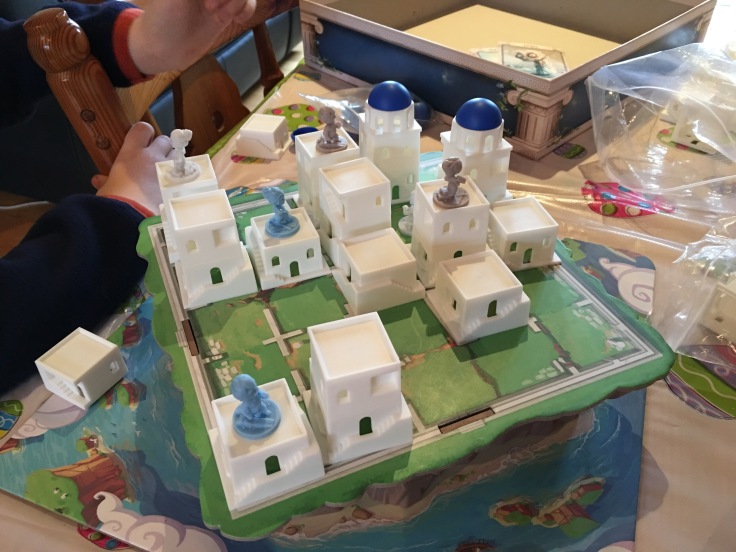 All in all it’s pretty simple stuff. It’s purely reactionary and thinking a couple of turns in advance. This is not chess. It is a lot of fun though at least for a while. You wouldn’t play this all night. Games last ten to fifteen minutes.
Extra complexity is layered on with choosing a god. All of which have special abilities. Hermes allows you to build two rather than one story in one turn. Others (whom I’d know the name of If I looked) grant you different win conditions, the ability to knock players out of the way and so on. There’s around nine basic gods then 20 or so advanced gods so there’s quite a bit of variety. 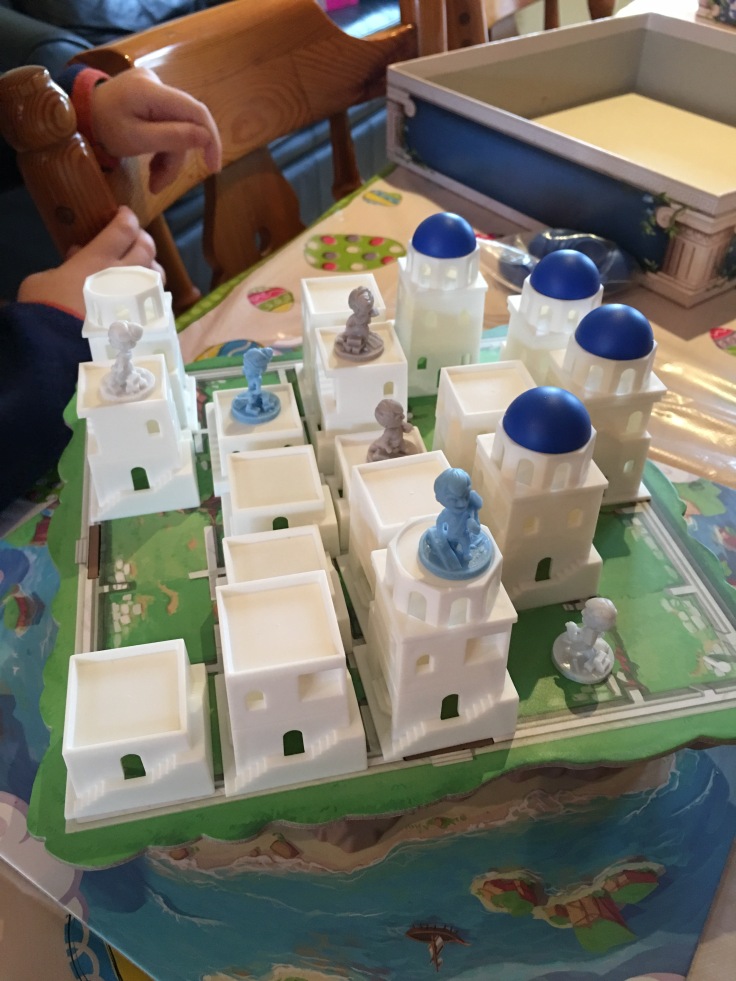 Ah ok I’m lying there isn’t that much variety. The game is pretty simple. You move you build. It’s fun. It’s filler. Kids will like it. It’s really only three player. It’s beautifully presented. The cartoony happy graphics are perfect for the game. The pieces are bang on. The game looks lovely. It’s a bit pricey for the game play you get but it’s a nice game to own. I wouldn’t rush out and buy it (I have a copy) but it’s definitely worth a look. I’ll have it at Knavecon
Huzzah!
Vic