“Let me live deep while I live; let me know the rich juices of red meat & stinging wine on my palate, the hot embrace of white arms, the mad exultation of battle when the blue blades flame crimson, and I am content” ….. A-Effin-men!
You HAVE to love Conan. He is everything you could aspire to. When you see motivational posts on Facebook about how few Fs you should give know that Conan gives less. He is the embodiment of Crom. The ayatollah of rock and rolla’s daddy and the one universal constant by which you can calibrate your moral compass. 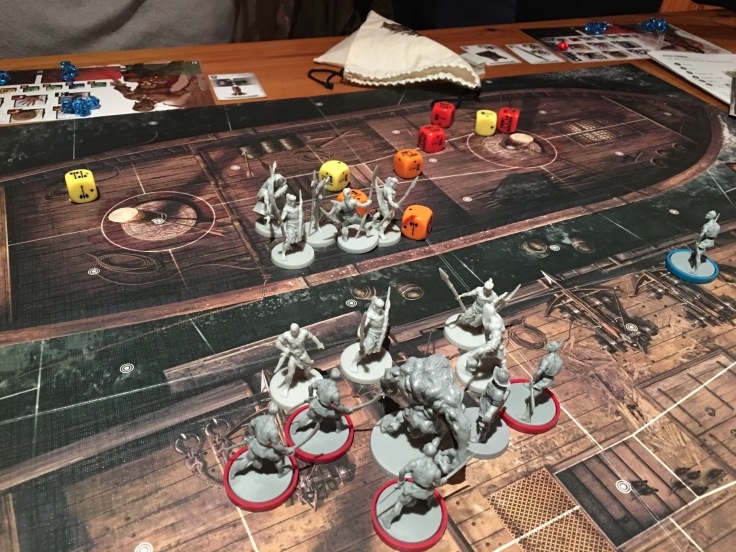 His world is brutal. Women get the short straw unless they’re warriors or warrior queens or maybe something with fight or warrior in the title. Certainly not princesses. This ain’t no Super Mario. No one cares about your shit in Conan. Either you’re strong, lucky or dead.
The Conan Kickstarter is a thing of beauty. The minis in it are a sight to behold as long as you behold the enemies (the kraken is incredible). The hero models are a bit less detailed which is a pity but not a show stopper. I guess there’s only so much detail you can get onto scantily clad heroes. Now having said that I haven’t seen them painted so I’m still expecting great things.

Conan is Heroquest ver 4 (or Descent v3). A group of 3-4 heroes embark on a quest each with it’s own map board and in a set amount of turns must complete it. The overlord who controls the monsters has to ruin their day. It’s a time honoured game model which is as old as Adam’s rib. Unlike the above games it’s not strictly an RPG. Your characters don’t level up (they’re pretty hardcore to start with). You pick a scenario and have at it. Each scenario takes places on a map board. The boards are set no modular adjustments. They’re a square 3×3 with everything on them. Three double sided boards come with the game along with a dozen or so scenarios. That’s it. Although more are coming and the internet is your friend.
Each scenario lasts 60-90 minutes and has you doing daring stuff like rescuing a princess, Protecting a ship’s captain, rescuing a cat out of a tree and so on. Now the interesting thing to note is the complete lack of RPG elements. You never level up. You can play any scenario you like there’s no experience /leveled up admission fee. Take any dungeon bash game you have and chances are you gave up on it after a half dozen (if even) levels and moved onto something else. It’s hard to get the same group together around the table. Conan does away with all this and I reckon you’re much more likely to play more games of it in comparison to the Descents and Imperial Assaults of this world as a result. The lack of choice in scenarios of both equipment and characters is wholly refreshing.

The game uses a very elegant mechanic of allocating a limited amount of crystals to various actions for your character. You start a round with a number of plastic crystals in the action zone of your character sheet. During your turn you can stick them in a number of spots to power certain actions.
For every crystal you allocate you can roll that many dice (of the appropriate color) and try and get as many successes on the rolls as possible. The amount you can use per action in a turn is limited by your characters ehhhhhh limitations and boosted by weapons and objects in hand. Soo. For example. Conan himself might have ten crystals and uses a few to run up to an enemy then his operator sticks a few in his attack he rolls those and scores a number of hits. The enemy who hopefully has some crystals available to them burns a few up to defend and try’s to cancel the attacks with his defenses and so on.
At the end of the turn crystals that are used get put in the fatigue box on your characters sheet and when the next turn starts you recover a few back to your action zone. More if you rest for that turn. It’s genius.
Overexerting yourself in a round will leave you open to attacks from enemies in their turn and more importantly since you only recover a few crystals unless you rest reduce your possible actions next turn. Knowing when to pull out the stops and when to be economic with your actions is key.
When you get wounded you loose crystals from your fatigue box and these can’t be recovered unless you use a healing potion. Which are few and far between and what’s more only recover a small amount of crystals. So just like real life avoid getting wounded. You can picture a wounded hero still in the fight but not running on all cylinders.

The overlord has a similar crystal juggling challenge. They start with several crystals (more the more adventurers playing) and allocates these to activate the bad guys. These bad guys appear on cards on a “river” on the overload board which acts like a sushi conveyor the dudes on the left being cheap to activate the ones on the right way more expensive to. Once a unit is activated it’s pulled off the conga line and stuck on the far right of it. The effect of this is clever. If you activate a unit/monster/villain the cost to activate the same dude the following turn is going to be high. Since you can only activate two groups per turn it means you don’t wind up spamming the same guy over and over again. It’s possible but too expensive and it will lose you the game.
Did I mention the minis? One thing I’m impressed with mightily are the models. We were lucky enough to snag the full Kickstarter and it comes with nearly 200 very nicely sculpted models. Some of the monsters are incredible. The kracken and the giant snake are exceptional. Even without these minis the mechanics are so good in this game it could be played with just cardboard and it would still be amazing. With the models in place it goes from exceptional to legendary.
I’ve played a lot of dungeon crawlers. Truth be told I’m bored with them. It’s the same old same old every time no matter how well presented but Conan is beyond all of these. It’s credit to the designers for coming up with something both simple and playable that rewards skillful play. I’m eager to play again both as heroes and villains and to be honest it’s a blurred line who’s who in Conan’s world. 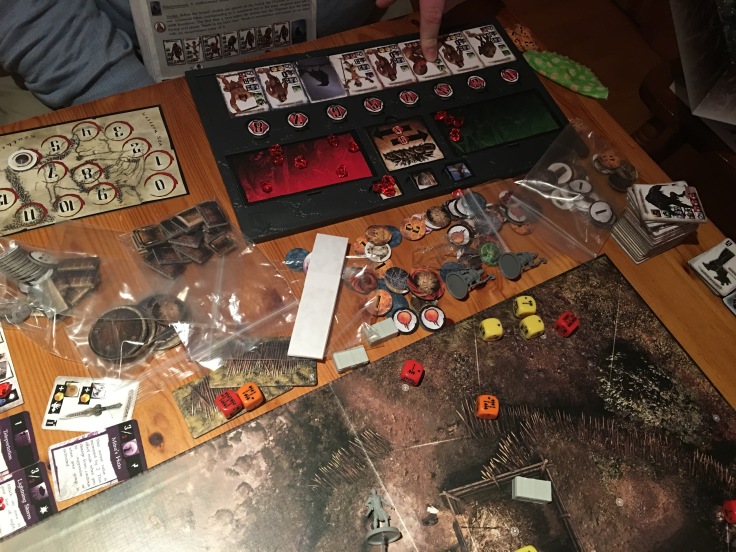 This is an exceptional game. Definitely the best dungeon game I’ve played to date (none of it actually set in a dungeon). It captures the spirit of Conan perfectly. Not the movie one the original 1950s, nasty, gritty no holds barred version. It’s not meant for kids. It’s meant for real men (and women) who like a challenge. Great game. Great presentation. Hear me Crom!
Huzzah!
Vic