I haven’t done this in a while, but I’m delighted to have  a guest writer do an article on what is a very interesting subject.  Boardgaming online.  I’ve been a fan of VASSAL for a long time but haven’t delved into the newer online stuff.  So whom better to speak about it but Leon Kelly who’s been playing quite a bit with a couple of regular knaves and ne’er-do-wells from the interwebs.  Here’s his take…. Digitally playing board games? Hersey I say, Hersey
This is sometimes the reaction you hear from people when you mention playing some of your favourite board games online, surely this goes against the point of a board game? So one of the main reason I play games is that I enjoy the social aspect of it, the jokes about that last game you played or how such and such is always a Cylon etc. It’s an activity that doesn’t revolve around just drinking in a pub with the exception being Knavecon 8 where copious drinks were required to just get through the stress (and backstabbing) of a 6 player game of AGOT the board game…..Yes Mike king in the north and all that…..Go Canada!

However sometimes it’s hard to schedule a time that suits everyone to play a game and that’s where online playing of a board game comes in. Today I’m going to focus on Tabletopia as (A) it’s the one I have used the most and (B) we would be here all day if I was to mention all the others. Tabletopia is a virtual sandbox for board games with free to play with premium versions available ($9.99 P/M) and works on PC/Mac. Its 100% officially backed by the game designers so unlike Tabletop Sim where a “moder” workshop and community exists the games have all the official artwork of the finished product (most of the time). 300+ games already exist including some of my favourites like Champions of Midgard, Villages of Valeria & Scythe.

I have used the premium version of Tabletopia as well as the “fermium” and both have worked flawlessly, yes the occasional drop out of a person in a game has occurred etc but that’s more peoples WiFi connection rather  than the programs fault.

The in game chat function works very well however my gaming group tends to use Teamspeak as it provides the most clear connection that is extremely stable. As soon as you enter one of the many current titles on Tabletopia and select from the broad range of online players to have a game with via its handy lobby system or add your steam friends directly, the game board replicates itself in virtual space so no large set up required which is great for some games, let’s use Scythe as an example as I’ve played it multiple times online and in the “real world”. 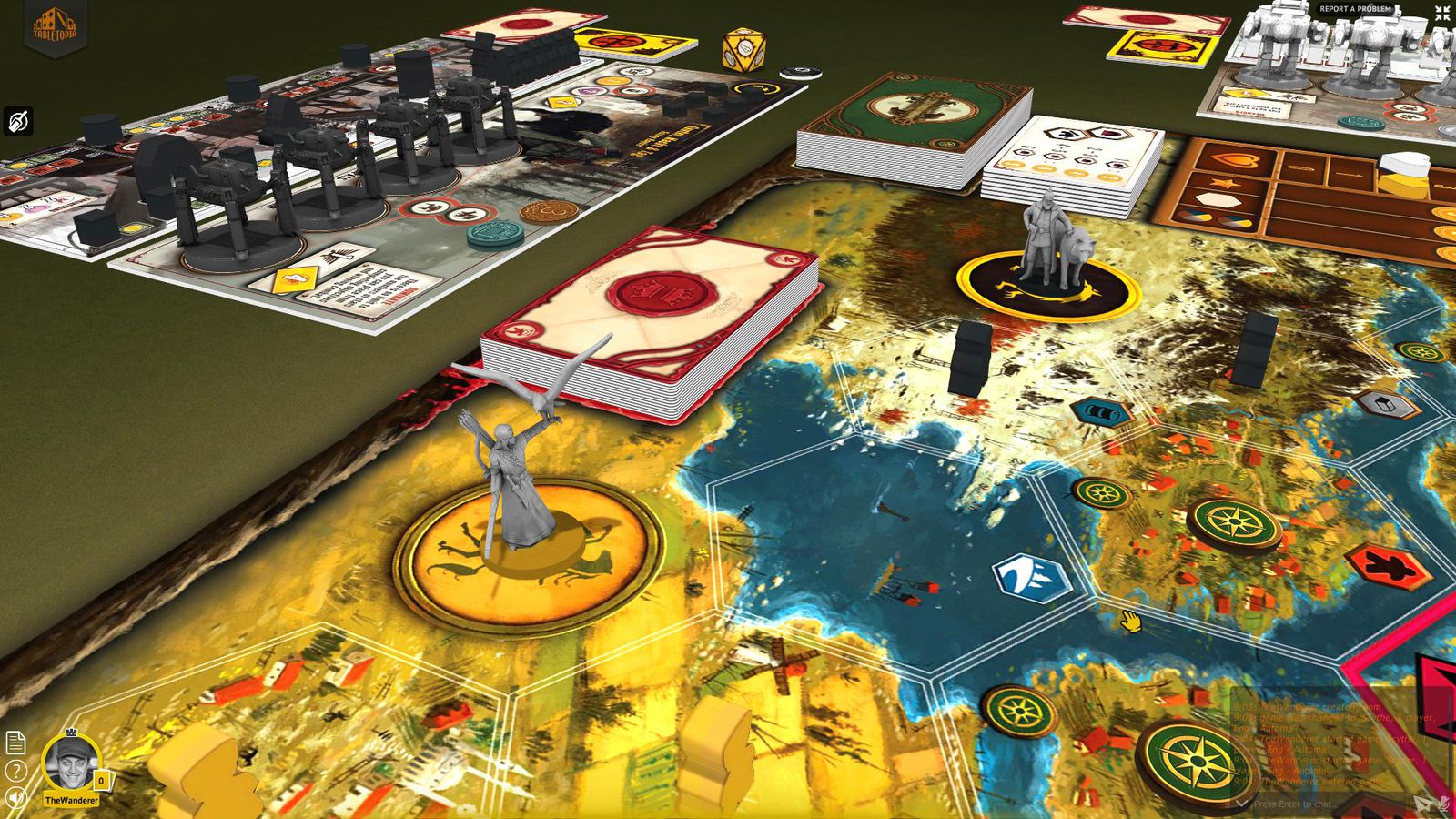 One of the best things about this system is that the rulebook is also replicated in digital format on the left hand side so you have access to this and it allows for you to learn the game and its phases not just tell you what to do. Interestingly enough I purchased Scythe but it was online where I had my first games with friends and we all learnt the system which meant when we played the “real version” everything was so much faster and smoother.

The pan, tilt, pick, flip, roll and all of the controls you use are obvious to any pc user and a neat controls page within the game explains how to do them all.  All the images including the cards, boards, rulebook and more are created in extreme high detail so everything looks fantastic.

The physics based engine that runs the system allows for the game to feel more “real” as you pick pieces and stack them or hide cards and coins in your private digital “hand” space and all of this capable in a system that’s free! Yes premium allows for unlimited games to be played at once or gives you access to some expansions of games or extra games but the joy of Tabletopia is that only one member of the party needs this and invites all his friends to join him.

Another fun aspect of this online system is that you can have something like YouTube running in the background not effecting other players. I like to get into the theme of a game and a good friend of mine had the great idea of sending us all a link to a playlist of classical Russian music and WOW did it add to the theme of playing Scythe, and best yet players that preferred to not listen to music didn’t have to, it was my own personal “mod” to the experience.

I mean this system allows me to play games with my uncle in cork, me in Dublin, my Friend in London and others from all over Ireland at the click of a mouse……… so what’s the catch?

Well there isn’t one really. I mean it’s free what do you have to loose, download it via steam so give it a go. What I will say for its cons which aren’t many and are kind of obvious, is that it can never beat the “real thing”.

Those eyes of death another player gives you when you attack him to backstab your alliance, or the hysterics from a table when a young child assassinates the “secret hitler” just when we were going to win because he listened to his dad and never trusted Jimmy, can never be replicated in digital space. Games that require diplomacy or something like Sheriff of Nottingham where bluffing and bull**it are part of the game just don’t work online not just Tabletopia. Having a small pool of games is limiting Tabletopia at the moment but if the likes of Fantasy Flight, Asmondee or Z Man games were to get involved this system could become phenomenal due to the detail Tabletopia put into these digital sandbox recreations.

Overall Tabletopia is a well-polished system that’s enjoyable to play and as it’s free what’s the harm give it a go and see what you think! See ya online fellow Knaves…..

To quote someone I now consider a friend through a mutual appreciation of board games.

One thought on “Rise of the Cyber gamer”