You know in a horror movie when one of the Actors hears a noise that sounds awfully like a crazed killer, the music racks up a notch and Phew! it turns out it was just the cat and we let out a sigh of relief …. Now is the time the crazed killer jumps out. We know this, we’ve seen enough horrors to expect it. When a game says “1-8” players, this is the cat. You should know better. It’s a one player player game really.
So having not seen the 1-8 players tag and having ignored the fact that it’s a coop I sat down with five chums to play Eldridge Horror. I didn’t really like it. 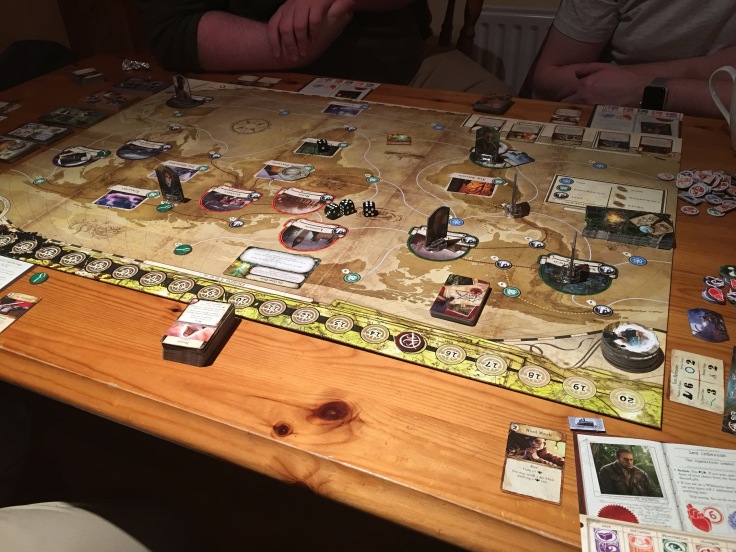 Eldridge Horror is like playing Wack a Mole with a big dog trying to hump your leg whilst someone throws flaming chips at you and A another shouts “boat number 3 your time is nearly up!” so you can’t enjoy the experience. If that’s what the designers were aiming for they got it bang on
We’ve been here before with Arkham Horror, Elder Sign and even xCom. Portals are opening around the world hastening the end game timer, various bad events have to be solved or they add to your woes and in the center of these distractions is an uber baddie you have to gather weapons and tools to defeat. It’s not a million miles from Talisman is it? 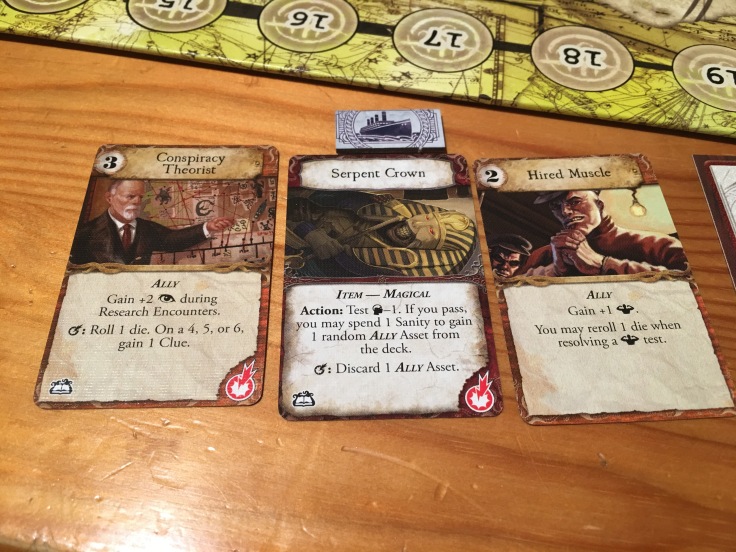 The game is to the usual high standard of Fantasy Flight production but interestingly doesn’t come with models for investigators or monsters. Fair enough it would be too expensive. The standees are fine.
Let’s get straight to it. The game is dull. It’s also practically solitaire, has long downtimes between player turns. For me it just doesn’t work and it’s a pity. The IP is as good as you can ask for. It’s just the premise of the game is bore ring. Yes there’s lots of atmospheric text but guess what? I don’t read it. I also pick the default character when I play a RPG video game and don’t spent ages on their looks. I want to get to the game proper asap.
This is not an RPG, it’s not scary. It’s a big old puzzle where everyone is playing against the game but rarely together. Now If a game is solitaire then it doesn’t require multiple players. If it doesn’t require multiple players it’s not really a game is it?

I’m going to stick a pin in Eldridge Horror. I had heard ok things about it and I feel I’m missing something. Maybe it’s better with four. I dunno but it left me cold and I wouldn’t rush out and buy it
Bad Fantasy Flight. Sit
Huzzah!
Vic