My four year loves board games (it’s was destined) So does my eight year old. I could yammer on why that’s a positive but let’s cut to the chase here’s the three step plan
Step 1. Get your kids/nieces/nephews interested in board games

Step 2. Advise their parents or yourself on what games they should buy

Step 3. These kids grow up and discover beer and sex and Boom! you inherent some sweet free games
So where to start? Well the beginning is a fine place and simple is good.
We’re surrounded by board games. Walk into a toy shop and chances are there’s a whole aisle full of board games for children. Granted the majority of them are not games as such, they’re time wasting preprogrammed exercises with limited skill and I guarantee you limited interest for kids. Kids are not dumb, they know a good game from a bad one. In this series I’m going to see if I can find a few decent games in the indifferent aisles of your local toy shop….. 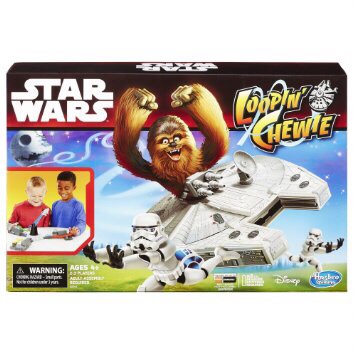 First up I’m going to look at Loopin Chewie.
For a number of reasons not least my kids got it at Christmas and I’ve had time to play it a good bit (thanks Santa)
Loopin Chewie is a cash in on the older game loopin Louie. The first thing that strikes you is Disney has taken its cut by reducing the players from four down to three which is a pity. It would be a much better game with four so if you are not hell bent on a Star Wars theme I recommend going back to the original Louise the review covers both. It’s also cheaper.

Having a couple of young children, nieces and nephews I’ve played any number of these type of mass market games. This is one of the better ones. A spinning arm in the center holds the millennium falcon which is out to get you.

Each player starts with three storm trooper coins lined up on a little sloping slot and smack bang in the line of the circling millennium falcon. Your mission with the aid of a little attached paddle is to swat the falcon up and away from your troopers and hopefully have it come down and take out your opponents ones (I don’t know maybe you’re hoping to get promoted) When you tap the falcon away because of the way it’s hinged and balanced it may spin off, it may loop and come back for you or hopefully it may rise and land amongst an opponent’s guys costing them a life. The game continues until all but one player has lives left.
Okay okay this is a simple game. I’ve pretty much just explained it in one sentence but beneath it’s simplicity is a game that stands at the top of its class. This is a fun little game. Games are short, typically five minutes but there’s a real go again feel once it’s over. All in all depending on your group you’ll get a good half hours play out of this before everyone has had enough but you’ll be back another day.
Compared to a lot of the stuff on games shelves this is not bad, the reduction to three players is a pity. It would be a much better game with four
Worth the money? That’s debatable. Certainly not full price while Star Wars fever is still raging. I picked this up as a half price deal and I’m happy with my purchase. Want to get your kids into board games? This is not a bad start or stop along the way
Huzzah!
Vic