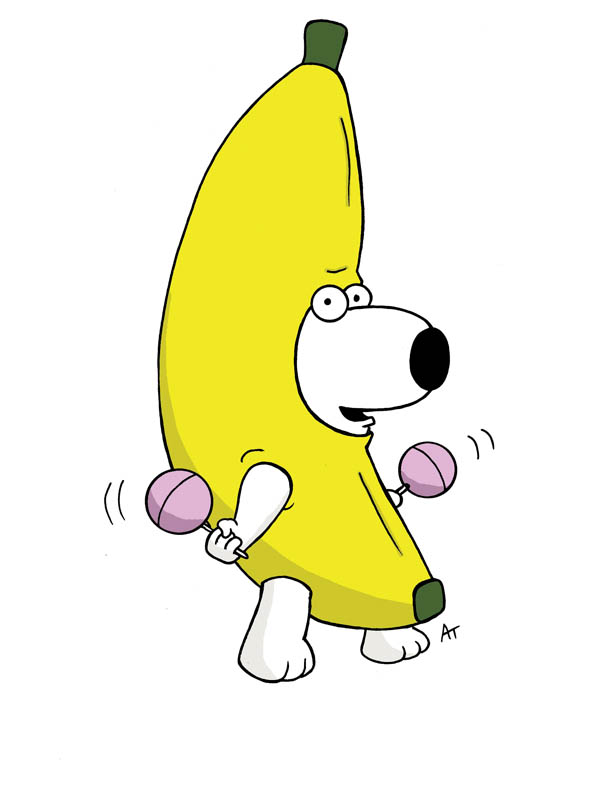 Junta is an old game. It’s also a classic and one of those rare games that seats seven comfortably. Truth be told it works best with the full heptagonic compliment and given the right group it’s a lot of fun

I have the old west end games version and the build quality wouldn’t make a huffing big bad wolf break a sweat. That said this isn’t a game that will come out all that often so it’s adequate. It’s also a game that can and quite often does given a vengeful group (the people I usually play with) drag on for some time. That’s fine you can adjust the wick of it easily by reducing the starting cash. 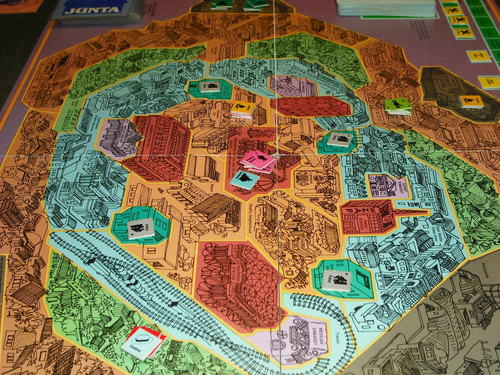 Junta is something akin to those celebrity multi bird Xmas dinners. It’s a simple please everyone round with the more than possible threat of a time sucking rebellion phase lurking just beneath the surface.

Each turn the elected el presedente draws a random face down budget from the card stack. They then announce the budget to the ministers (whom he put in office), “minister for secret police gets three million, the Air Force gets two, navy none” and so on

The ministers use a combination of face up political support cards and cards in hand to either vote it in or force a recount or possible coup. It’s sweaty stuff.  You find yourself trying to please everyone or at least enough to stay in office so you can feather your nest.

If it passes ministers hide theirs stash and if possible try and make it to the bank to lodge it in their Swiss bank account. The others can hire assassins, thieves or some other threat to try and waylay them. At the end of the game whomever has the most tucked away in Switzerland wins 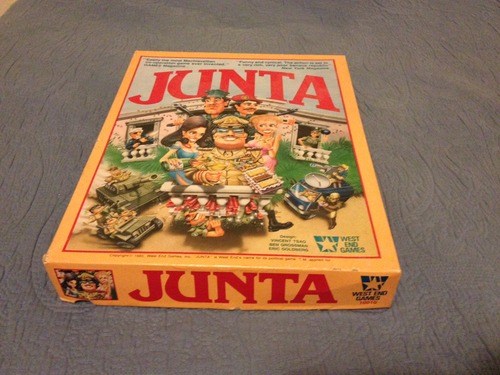 You’d think the president would be the best hope to win but between keeping others sweet and the very real threat of coup it’s often not the case.

Like a lot of games I like the majority of the skill comes down to negotiations, lying, bribery, coercion and good old fashion back stabbery.
It’s not a difficult game to learn. It’s definitely a fun game and it’s one of those classic games you should really try and play. I recommend the game. I’ll have it at the next knavecon and probably knavekids so you can try it for yourself