Five tribes is a four player game. That’s the first thing that struck me. The second was this game can never ever (ever) be played with anyone who over analyses their move.

The game is relatively simple. It consists of a random spread of five by six tiles each populated by three meeples of five different colors. Each of the tiles has a special ability and a points value for ownership (it’s all about the points) 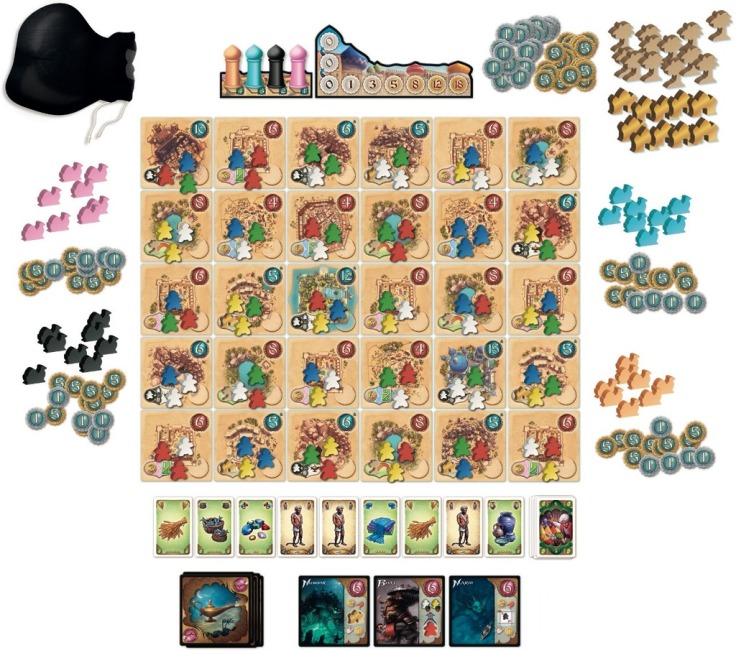 Play sees you lifting a clutch of meeples and then dropping them off one at a time into adjacent tiles in a contiguous path. The last spot you drop on you pick up all the meeples of the last colour you dropped, place them in front of you and kick off the special event (if you meet the criteria) for that spot. Lift the last meeple in that square and you claim ownership with a towel over a sunbed (or more accurately a camel meeple)

A number of other scoring routes exist, access to which are controlled by the colour of meeple you lift at the end of your sprinkling. Sets of goods cards (the more variety the more points), particular colors of meeples (worth progressively more points at the end the more you have) and djinns who not only grant victory points but shower points on you when certain actions occur. Palaces and palm trees can also be build which increase score yields.

It’s also one you’ll need a few gos of before it makes sense. It’s a grand game (as in it’s grand not big or sweeping), I’d go so far as to say it’s a forgettable game. There’s a lot of this stuff out there (Puerto Rico, Istanbul and so on). If worker placement be thy God than this is a fine Demi God worthy of your prayers. If however you like to stick it directly to your friends more directly (there’s some cock blockery to be had in the shape of assassinations and grabbing before others do) then you might want to look elsewhere