Memoir 44 is a lite tabletop historical wargame for two players set in ww2. It comes complete with all you need for a dozen or so scenario based battles, it’s easy to play and perfect for introducing your children to the horror of war.

I’ve always had a soft spot for Memoir 44 (and I’ve successfully used the word Memoir five times, which may not seem like such a big deal but it’s more than you’ve used it in a whole week)

The models are neat and dinky. Not up to the high standards of say descent, more Airfix 72nd scale from your childhood (well, my childhood) but perfectly adequate for purpose

The base game comes with a big
Pile of German and America troops consisting of infantry, tanks and artillery and a few extra bits like sandbags and tank traps. The game board is a good sized double sided hex board with grassland on one side and a beach on the other. Perfect for your d day Landing needs

On top of the map a number of hex tiles can be laid to add rivers, hills, forests and villages. Other features like bridges and bunkers can be laid on top of these again to create fairly varied battlefields.

The game comes with a number of increasingly complex scenarios but it never feels hard to understand and above all other things the game is always fun and easy to play.

This is a great game for two players. It’s a good one to give to the seventh and eighth player on a games night or to while away a few hours without being too stressed. It’s also a best game to show to kids and introduces a number of key elements for more complex tabletop games

The command system is quite neat and features cards that allow you to move troops withe on the left, centre or right flank. This system leads to some interesting choices on holding cards, bluffing and guessing.

All in all a best little game. I got to play it last Friday with my 6 yr old and although the rules were simplified a little for that battle it still proved to
Be a fast, fun game.

A dozen or so add ons and numerous scenarios are available to add longevity. I’ve only ever played the base game so I can’t comment on the extras but I like it and look forward to working my way through all the scenarios.

All in all good clean warlike fun 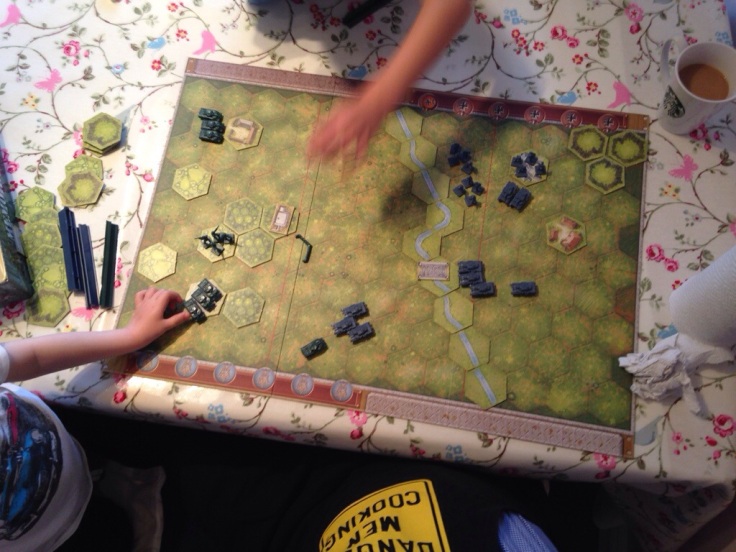