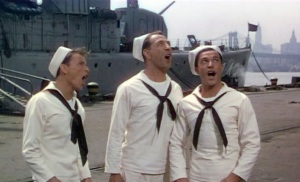 Having played Serenissisma a number of times I thought I had heard every possible Seamen joke, I had been misled….

We had a big group on Thur night and we tried our best with an eight player game of Tsuro but when it’s that size the only thing to do is split into two groups.  Our group played this.

Serenissisma is a nautical game of trading in the Mediterranean in the 14th Century.  Integral to the operation of your fleet are your seamen.  Being a group of 16yr old schoolboys at heart and mind, the game very quickly became a series of jokes about the aforementioned lads.  So what follows now is review of the proceedings liberally infused with seamen ‘jokes’…..

“Let’s not beat about the bush (you see what I did there), I’m a big fan of Serenissisma, My copy has been knocking about for a long time and only occasionally do I get to whip it out and play with it with unsuspecting gamers”

The game is played out on a map of the Mediterranean with up to four players taking control of a major power.   The map is made up of a number of ports that each supply one of seven goods Wine, Iron, Wood (of course), Cheap Plonk, Knock off CDs, (well maybe not but you get the idea.) and around 30 or so sea square   Each of these ports that produce a particular good want goods of the other types so you’re job is to zip around in your ships full to the gunwales of goods and seamen and drop them off like a merry postman, sticking your flag down to claim ports as your own and getting into or avoiding fights with other players doing the same.  A Pat Mustard of the waves if you will

There’s a limit of five spots in a ship, so the balance (and there’s always a balance in games) is between how many goods you stick on board and how man seamen you ram in there.  More seamen means more protection and speed for your ship but less space for valuable trade items.   Even more fun as you probably guessed it is to attack other players ships and take their ships and goods as prizes.

In all the games you’ve played THIS is the most unforgiving of plays.  You build up a fleet of ships, buy some goods are thinking about your Ferengi profit and BAM! some savage steams in, pistol whips your swimmers and gets all familiar your very expensive goods and ships, THEN to add insult to injury, sails off and sells your previously owned goods.  Pirate code me hoop.  This is not a safe game, once you get tangoed like this you’ll never forget it so guard your stuff well.

“The key to the game is your seamen… (waits for laughter to subside), you need seamen, lots and lots of seamen, if you’re going to succeed (oh err missus) and come out on top, you’ll need more seamen than the other fella (canned laughter). “

Once again the old puzzle, which comes first the chicken or the egg problem is evident here.  You can’t afford lots of seamen if you don’t sell lots of goods, you can’t protect your goods without lots of seamen.  So you do you’re best.  A Gamer worth their salt does this sort of thing the whole time.  Still hurts when you get holed below the keel and your plans evaporate.

The other thing I like about this game is you don’t really have time for vengeance.  Go after someone who’s wronged you and you’ll probably lose the game.  You need to pull up your big boy/girl pants and get your house back in order and then ON YES then you get to exact a revenge on them IF you have time.  So in essence get your vengeance in first and make sure you do it so they never recover.

The game ends after eight turns (more if there’s less players) and rattles along for a good 2+ hours depending on players.  There’s a good range of decisions to be made each turn and there’s very little downtime as everyone else’s move can have a big impact on you.  Some of the mechanics like getting a monopoly on certain goods and setting the prices for them can really rankle players so if you’re militarily weak it’s often a case of appeasing other players but ultimately if you don’t hire seamen and plenty you’re goosed good and proper.  As the game progresses it becomes more and more crowded with ships and it’s very much a powder keg waiting for the spark that’s most beneficial for you.  This game can be very tense at times, mostly towards the end.  It’s also possible to be really petty, sacking a person home city just because, even though you’ve got them on the ropes already.

Is it any good? Yes.  It is.  Iv’e got an older copy, a new revamped version two came out and I haven’t tried it but I understand it’s a bit different from the original but opinions are divided as to which is superior.  Will I play it again soon?  Wellllllll… probably not.  I’ve played a good bit of this game and whilst not bad it’s not as good as some newer stuff out there.  Worth getting.  Welllll again there’s better out there but that doesn’t make it bad.  Try it at the next Knavecon.  I’ll bring it along and you can join in a chorus of comments about seamen.

Don’t get me wrong I like this game but if you get overrun by someone else seamen, it can leave a bad taste in your mouth.

More of that next week