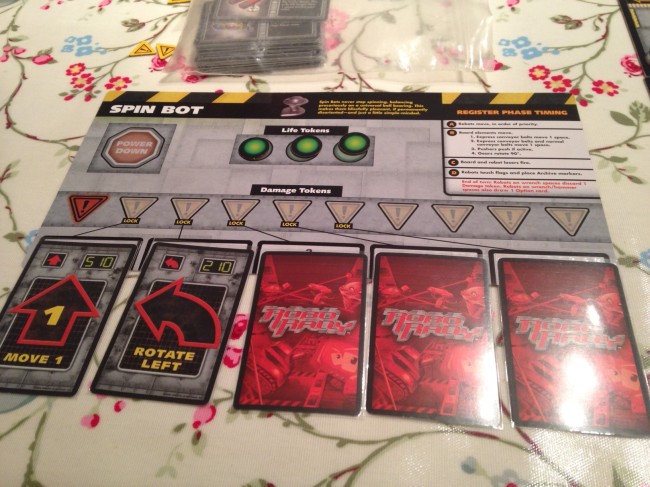 Does anybody remember Big Trak the toy from the 80s, you gave it a set of instructions to go forward turn left, move back, fire it’s gun and so on then off it went and took you literally? Robo rally is a game of big trak with up to eight players running their big traks around the sitting room bumping into each other knocking each other into lasers and bottomless pits (I suppose every analogy breaks down sooner or later)

Richard Garfield has written some fantastic games in his day, the great Dalmuti, Magic the Gathering, Netrunner, Chess, X and O you name is he’s written it.  We got to play RoboRally on Thursday night, it’s an old enough game by the afore mentioned but that’s neither here nor there when it comes to gaming.  RoboRally is a fun little game, it’s fast, there’s very little downtime, it scales very well up to eight players and but above all it’s good clean no-one losing an eye fun.

Each person takes a robot (all of which are the same) and has to give it a set of instructions to navigate around the factory BigTrak Style. The factories made up of a grid of square with contain empty spaces and various traps like any good factory should.  Hazards like conveyor belts, lasers, rotators, pushers, bottomless pits and so on litter the play area and it’s obvious that the same team that did the safety audit on the Death Star we’re signed up to do the one on this factory. 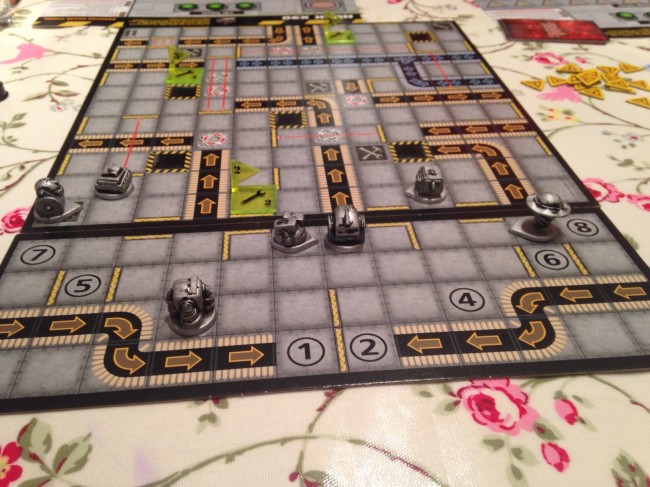 Each turn the player gives a set of five instructions from a hand of eight. The instructions are pretty straightforward like forward two squares, backwards one, left turn, right turn and so on.  Care and consideration has to be taken of your robots current orientation, the obstacles near him and if some other dolt of a droid is going to blunder into you.  It gets further complicated with conveyor belts that move you along if you wind up on them so all in all a bit like Kosmonauts if you’ve seen that other great game.

Where it becomes frantic is where you’re trying to issue your orders as quickly as possible before the others do. If you’re the last person and the very fast egg timer runs out than the others get to put whatever instructions they want into your robot.  It’s a bit like having a drill instructor or in this case multiple drill instructors shouting at you while you try and strip your rifle but without the pillowcases, bars or soap and full metal jacket ammunition.

There’s a wee random element in there as well as the instructions for each robot get executed based on the priority of the card that you have, some cards that have high numbers some low so what can happen is you have a set of instructions to move forward however before you get to do that another robot has bumped into you and now of course that’s fantastic set of directions you gave your robot earlier all go to pot as you’re no longer going from the same starting point.

At the end of every move your robot fires it’s forward laser and anything in front is going to get the horns. Robots can take damage in the form of counters and as this takes it’s toll, it becomes more difficult to plot a route as certain instructions get locked in and cannot be changed. Not good.

Needless to say nobody in the group draws pleasure from other peoples problems. Seeing someone else’s robot going into a tailspin and damaging themselves even more is a time for great sadness in the group and not at all laughing.  Paranoia style you get three lives and your damage resets or shutting your robot down for a full turn will cure you of damage to.

There’s a stack of maps and scenarios for the game along with extra cards for additional weapons and equipment.

The game we played was a simple get to the flag variety where each person had to run over tree flag square one after the other to win the game. Needless to say we only got as far as the second one before we all gave up or were destroyed

The whole thing plays out like an entrance exam to an insane asylum. Getting your orders in first before the other players is a head wrecker, That said if you have a logical brain this is a breeze. I like RoboRally I have one of those brains that’s messed up and lends itself to this sort of thing

With the exception of Kosmonauts I haven’t seen any games even similar to this (I stand to be corrected) it’s unique and very flexible, both in terms of length and difficulty.  Even though it’s nearly 20 years old you can still get it.  Like the top 100 movies it’s something you have to see (play).  I’ll have it at the next Knavecon and will be happy to run through it with you.  Just don’t ask me to play, I’ll beat you.  Just like I didn’t do on Thur night, there were some other messed up brains at that gathering 😦