Remember the Character in the Lego movie that was into spaceships? That’s me when it comes to Twilight Struggle. Having discovered it a number of years back I’m still enamored with it.
I’ve spoken a bit before about the game. As two player games go it’s hard to beat. Playdek have released it for the PC this week. For €12. 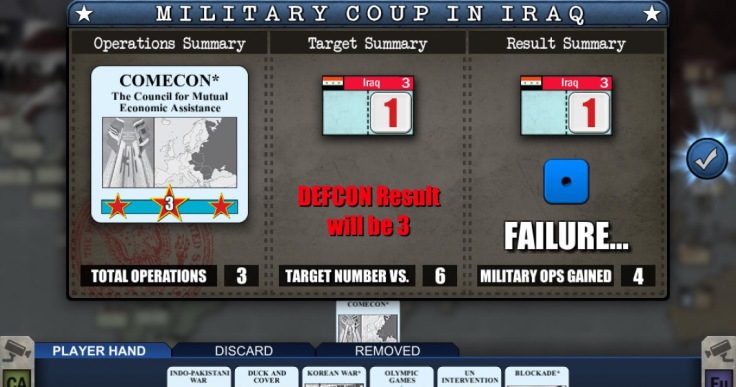 Playdek don’t mess around they’ve released some cracking implementations of card games for the phone/tablet market. Having finished the PC version they’re now switching their efforts to improving the AI and developing a phone/tablet version which will be cross platform
The sharp ones in audience will have twigged the AI comment. The game comes with a reasonable AI opponent. It’s better than I thought it would be but it’s no match for a human (yet). I think a game like this just like diplomacy is a hard one for any developer to attempt. So hats off to them for including it. It’s shown as easy AI but I’m damned if I can find an option to dial up the difficulty apart from giving it a head start in points. 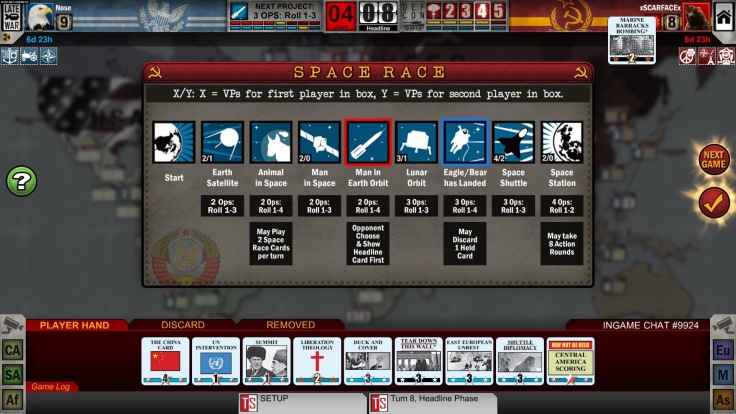 The interface is very nice. I’ve played TS on vassal and a few web implementations. This is the best one so far. Everything is in there and it’s crisp and responsive. It would have been nice to see what’s left in the draw deck but it’s a minor niggle and you should be card counting anyway. Audio is good too with sweeping music and snippets of leader speaker between turns. You’ll probably turn it off.
Multiplayer is where this game shines. It links to the Playdek setup so if you previously played a playdek multiplayer you’re already there along with your buddy list. The game plays both realtime and asynchronously which is key since a game can last Several hours. There’s even a rating system in there for players so you gain score as you win and matching opponents by skill level becomes easier

If you’re a fan of TS rush out and buy it. If not come to Knavecon 7. I’m going to be showing people how to play. The mechanics. Not how to win. That’s a headache for just you
Huzzah!
Vic