Indulge me. I don’t talk about video games all that often but when I do they tend to be good. So living on the edge as I do let’s begin…

Down to the last 20 I can hear shots close by. All four of our team are alive, mostly uninjured and tooled up with assault rifles and a mix of shotguns, Smgs and pistols. Ammo isn’t a problem I don’t expect to live too much longer. Windows above me break and the room is raked with fire, the teammate next to me makes a run crouching up the stairs and after a lull in shooting I follow him. I get out on the balcony and see him snapping off shots and ducking behind the stairwell wall. We huddle down when grenades explode where he was firing from seconds ago. Smoke grenades are arcing in now obscuring the attackers. Down to the last 12

Windows are breaking and louder and more sustained fire is happening all around. I jump down onto a lower roof and through a crack in the parapet spot a shooter in a window across the street. He sees me. We exchange fire for a bit then his buddy wings me. I’m taking damage. I keep their heads down with fire but I get hit again and go down. No one is near to revive me. I’m shot and killed. It’s game over man.

This is Player Unknown Battlegrounds and it’s battle royale with 100 participants either all solo, in groups of 2 or groups of 4. Its glorious This is the best shooter I’ve played in years.

When the game starts after a countdown you all appear together in a transport plane all 100 of you flying in from a random edge of the map. The map is a mixture of towns, hills, farms, various installations, sparcely populated areas and everything in between. You decide when to jump. Your team needs to stick together because every other team does. You freefall then pop your chute and glide in. Spotting a pile of other chutes nearby is a recipe for trouble and certain areas are more popular to get to as they’re more likely to contain better loot. 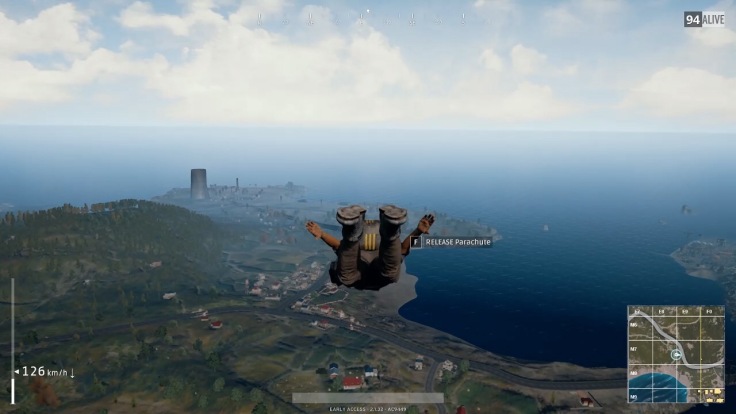 The landscape is brutal soviet, abandoned like a zombie game.  Houses, apartments and various installations yield up a variety of weapons and supplies. Gear comes in the shape of melee weapons, handguns, shotguns, SMGs and assault rifles. You’ll also find bandages and medipacs, backpacks to carry more gear and ammo which is key to survival. You’ll also find bits and bobs like scopes and grips to enhance weapons. Silencers are like gold. 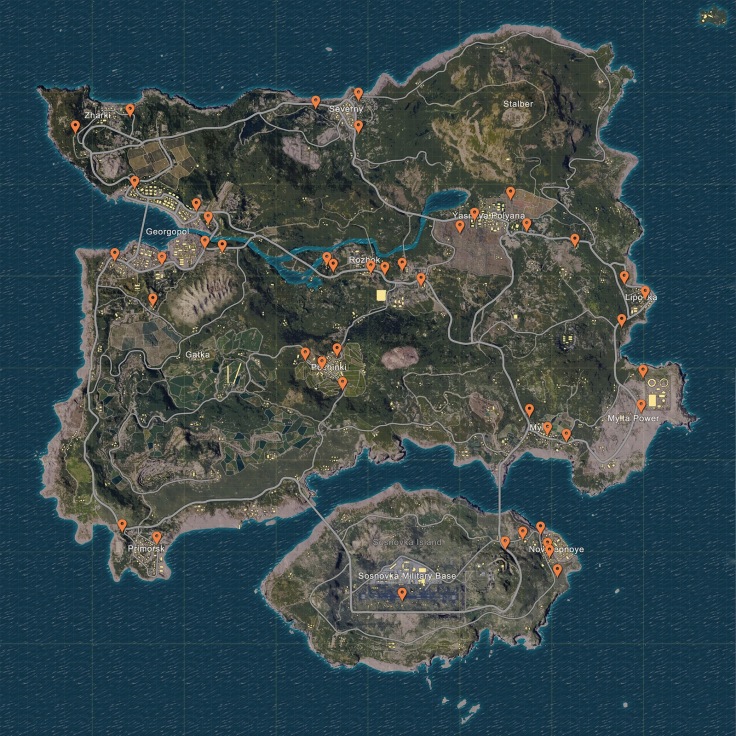 When you touch down the very first thing you need to do is get a weapon and fast. More so if someone has landed near you. I’ve been in fights where someone came after me with a machete and I just got to and loaded a handgun in time to stop him.
After the a few minutes things get interesting. A white circle appears on the map and you have a few minutes to get inside it’s radius or you start losing health. Then a few minutes later it shrinks, then again and again. The whole mechanic herds the survivors in towards each other. Desperate fights break out between people and a counter on the top shows how many people are still alive. The goal is to be the last person standing. I’ve never done it BTW.
To aid you occasionally a transport plane will fly over and drop additional weapons. All of which are cool like gillie suits and silenced sniper rifles. The dropped crate has a smoke canister which guides you in but also other survivors and it’s a real conflict area.
Dotted around too are vehicles like bikes, cars and buggies which offer fast travel but are noisy. There’s nothing like cruising along in a jeep with three passengers hanging out the windows weapons drawn just itching for a drive by shooting
As the game continues the circle contracts and the fighting becomes more desperate as the best and better equipped players survive and make it to the end (you can scavenge equipment from bodies) The tension is stupendous. Holding a building with your team is amazing. Assaulting one more so and pulling off a sneaky kill is a fist pumping hooting event. Until that is someone one does it to you and it’s back to another match.

The replay value is magnificent. This is an addictive game and for an early access it’s really polished. I understand the player base went to over a million the first weekend of launch.  I can see why. I’ve played a lot of shooters but this is the one that’s blown me away in the last few years. At €30 it’s worth checking out.

You’ll find me out there playing or maybe I’ll find you….