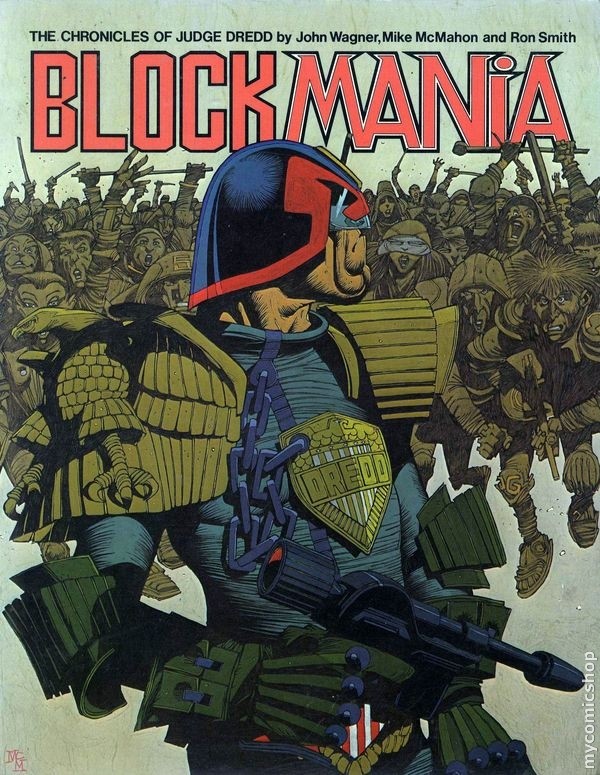 I’m going to go back to a time long past. Imagine what you’re looking at going all uniformly wavy and wobbly and someone pressing one key on a Casio and BOOM you’re back to a time when games were broken, we had no sense and it rained a lot. (an earlier version of now)

Welcome to the 80s where we didn’t realize we were underprivileged until someone said it twenty years later. This was back when Games Workshop wrote games and we’d watch any old shite on TV If it had the whiff of Sci-Fi. about it. But enough of that the game I’m going to talk about is

Block mania was a magnificent Judge Dredd story in 2000AD. If any of this sounds unfamiliar you owe it to yourself to read these progs. If you’ve read them already you won’t have forgotten them.

Short version. Two skyscrapers (blocks) full of drug crazed inhabitants are going to knock seven shades out of each other with whatever they can lay their hands on. The game will end when one building collapses or the judges (police) arrive and end the party. 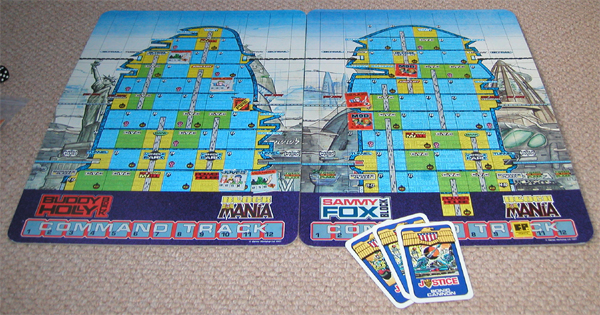 Before that happens you’re going to roll up action points (Like it’s 1999) and activate your raging citizens and get them firing missiles, detonating demo charges, manhandling vibro drills and causing mayhem mega city 1 style.

The game now is old and possibly a bit moldy like a lot of old cardboard games. This is a game that’s played for theme and nostalgia, it’s a fun novelty cocktail game not to be taken seriously (like every other game). If you’re a fan of Dredd you’ll be in Mega City heaven. There’s a generous pinch of luck in this game but it doesn’t detract from its working

GW released an expansion for it called Mega Mania which allows four players, each with their own block to fight it out. Be warned adding more players can turn a quick game into a LONG game.

This game has odles of charm. Unlike a number of other games of the era it’s not just a re-skinned version of something else. There’s a lot of fun to be had here and to my knowledge it’s a pretty unique game. It wouldn’t hold up against a modern game as we’ve come to expect a lot of standards in modern board games but then again they’ve had 30 years of time to mature and improve.

I’ve been lucky enough to play it a few times over the years, well decades and it always brings a smile to my face  (more so, if I collapse someones building)

As it stands BM is a unique, fun game thats definitely worth playing at least once and a fine throwback to some of the better games of the 80s